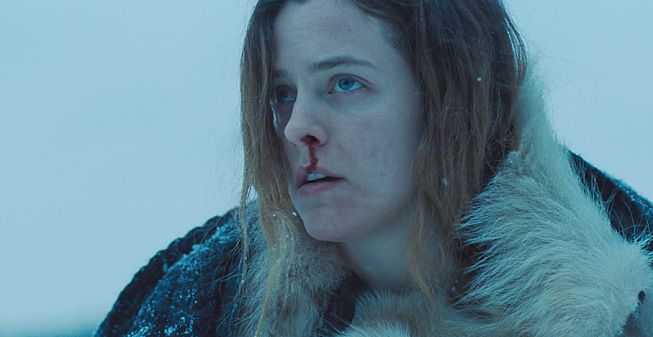 It was easy to predict that the Austrian film landscape would be too small for Austrian filmmakers Severin Fiala and Veronika Franz after the success of their elegantly constructed horror film GOODNIGHT, MOMMY. Their new film THE LODGE is a British-French-American coproduction produced by Hammer Films. The film would‘ve been a perfect Christmas antitode it if had opened a few weeks earlier. Two children, teenager Aidan and his 8 year old little sister Mia, are grieving for their mom who suddenly passed away 6 months ago. Their father Richard leaves them alone in a snowed in but well equipped lodge with his new fiance Grace (Riley Keough) during the Christmas holidays for a short period of time. The lodge plays a big role in the family‘s life; the children have a big doll house that‘s very detailed and have puppets in them that take on symbolic roles. It‘s reminiscent of the models that Toni Colette builds in Ari Aster‘s HEREDITARY, which is probably by accident, especially because Fiala/Franz and Aster are circling similar themes. The children quickly find out that Grace is the only survivor of a Christian suicide cult and notice that the madonna painting and crufiixes are making her feel ill at ease. Soon strange things happen, and like in GOODNIGHT, MOMMY, it‘s often clear what‘s reality and what‘s a hallucination. THE LODGE is a psychological slow burn horror film that works more with atmosphere than shocks and takes several turns that serve less as surprises and more like possibilities hovering above the story. The anti-religious and morbid style of Fiala and Franz feel just as Austrian as the films of Ulrich Seidl despite it being an international production.