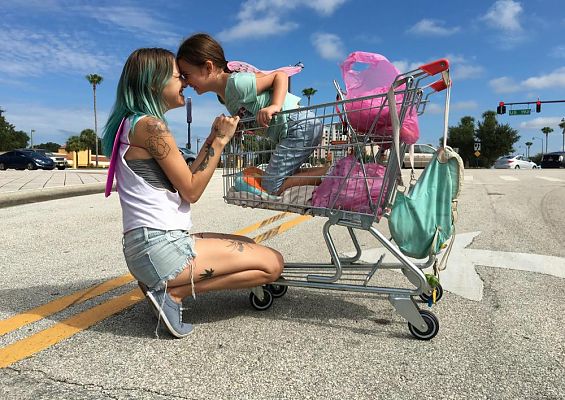 Moonee lives in a hotel on the highway right before Disneyland with her 22 year old mother Halley. While the adults fight to survive, Moonee and her kid gang are having a great time.

On a highway right right next to Disney World there aren‘t any real “projects,“ there are just hotels, most of them built in the 80s. The hotels try to take part in the Disney tourist stream in and have copied the Disney look in a way that is possible with no license from the cooperation. Tourists used to live here, but by now the hotels are permanent interim solutions for people who have lost their homes. Permanently living in a hotel is expensive and it‘s illegal in Florida on top of that. The state doesn‘t want to have poor ghettos in hotels.

Sean Baker‘s THE FLORIDA PROJECT is set in one of these hotels, the brightly purple Magic Casle Motel. Little Moonee lives here with her 22 year old mother Halley who lost her job as a stripper. The film follows Moonee and her kid clique in their daily shenanigans: spitting on cars, scrounging up money for ice cream, and annoying Bobby (Willem Defoe), the grumpy but caring hotel manager. Life in these colorful dens is a constant adventure for the children, while the adults are busy getting enough money for the rent. Bobby has to make sure that his permanent tenants move out once a month. He keeps a room free for them, tries to find a replacement hotel, and gives them a loan that he doesn‘t except to get back. Sean Baker calles his film a „modern version of Hal Roach‘s THE LITTLE RASCALS.“ Like in STARLET and TANGERINE, he finds glamour and solidarity on the fringes of bourgeois society. THE FLORIDA PROJECT is fun, moving – and looks great to boot.