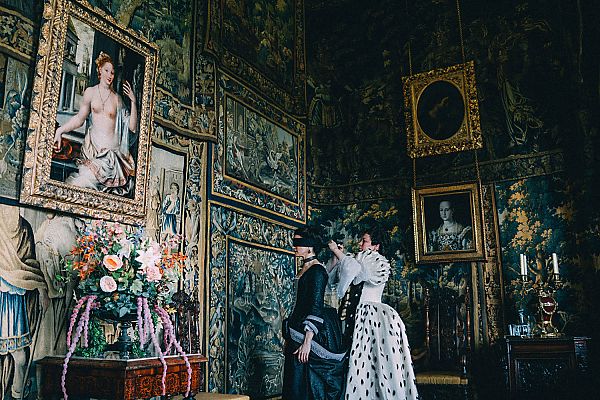 No one has filmed malice, lies, deception as wonderfully as Yorgos Lanthimos has in THE FAVOURITE in a long time.

No one has filmed malice, lies, deception as wonderfully as Yorgos Lanthimos has in THE FAVOURITE in a long time. The film tells the relatively true story of the reign of Queen Anne (1702-1714), the granddaughter of Mary Stuart and the last Stuart on the British throne. The Queen (Olivia Coleman) suffers from gout and digestive problems, she only leaves her splendid room in a sedan chair, a room in which bunnies romp about as mementos of the great tragedy of her life. The governing business and negotiations with parliament are in the hands of her confidant and favorite Sarah Churchill, the Duchess of Malborough (Rachel Weisz), a childhood friend whom the Queen trusts. Sarah tries to convince the Queen to raise taxes to keep financing the Spanish War of Succession which her husband John Churchill is trying to win as the commander-in-chief of the British troops. Sarah‘s impoverished cousin Abigail (Emma Stone) appears in court getting up from a dirty puddle. Because she knows a salve that helps the Queen‘s gout and also because the cute new girl promises a stimulating erotic divertissement, the Queen appoints her as her chambermaid. When Abigail allies with the opposing party and has influence over the Queen, the intrigues escalate to an erotic and political duel between Sarah and Abigail in which both favorites go all out.


Primarily shot in the baroque Hatfield House and mostly scored by Händel, Vivaldi, and Purcell, THE FAVOURITE is a grotesque feast for the eyes, the drop height from the elegance and cultivation of the decor to the decadence of the heroines in their bizarre love triangle is immense. Robbie Ryan, who had his breakthrough as Andrea Arnold‘s cinematographer, mostly films in extreme wind angle shots, turning every corridor into an absurdly chic gate of hell. The actresses are brilliant, especially Olivia Coleman who plays the Queen as a wheezing, moronic, shrewd, infantile, and extremely sad woman while also managing to show the inner turmoil of her character. Yorgos Lanthimos‘ film is a purely amoral cinematic pleasure and probably the most successful story about intrigue since DANGEROUS LIASONS.