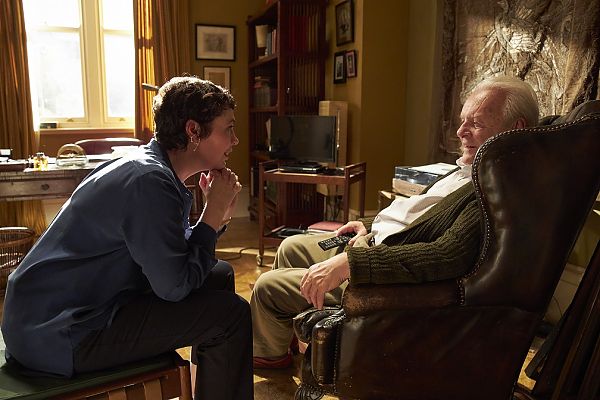 Anthony (Anthony Hopkins) is a distinguished old man who lives alone in his spacious apartment, but he‘s having more and more glitches. French director Florian Zeller portrays the mental decline from the subjective perspective of the afflicted.

The pain of the creeping loss that occurs when a family member gets Alzheimer‘s or dementia, has been seen on screen several times in the past. Sarah Polley leaned on Alice Munro‘s short story in her moving drama AWAY FROM HER. David Sieveking depicts the loss of his mother in the painfully personal documentary VERGISS MEIN NICHT. Frenchman Florian Zeller portrays the mental deterioration from the perspective of the subject himself and adapted his play THE FATHER to the screen. The illness becomes tangible for outsiders as well. His protagonist Anthony (Anthony Hopkins) is a distinguished older gentleman who lives alone in his large apartment. His is lovingy cared for by his daughter Anne (Olivia Colman), but she can‘t always care for him and so she looks for a caregiver. Till now, each candidate has faltered when faced with the imperious ways of the man of the house who doesn‘t want to be disturbed. For Anthony, the world around him is getting more and more confusing. He has more and more snafus and is becoming a stranger in his own environment. The way Zeller creates the degeneration with images and atmosphere is deeply disturbing. The subjective view of the world through Anthony‘s eyes is drawn deeper into a web of confusing and mistrust. The typical narrative pattern is dissolved and the audience‘s orientation gets taken away because of it. The only anchor is Anthony, who is losing his grip more and more. Sir Anthony Hopkins, who received his second Oscar at 83 years old for his performance, embodies him with conviction in every moment and has an equally brilliant acting partner in Olivia Colman.