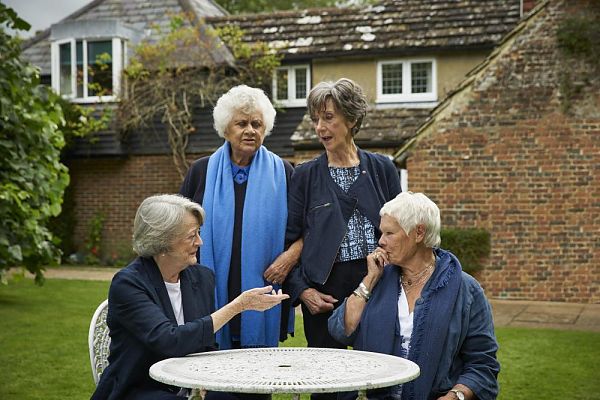 Four elderly actresses drink tea and chat. It’s perhaps not the most promising of premises, but when the four actresses in question are the leading lights of stage and screen, and have been for some time, it’s no surprise that this film is more than the sum of its parts.
Roger Michell’s film is a gentle, though unsentimental group portrait of Judi Dench, Maggie Smith, Joan Plowright, and Eileen Aitkens, as they gather at Plowright’s home for a catch up over tea and champagne. The original title, NOTHING LIKE A DAME, is much more appropriate, particularly as the film’s subjects don’t seem to regard being dames as anything to get worked up about.

Michell’s intelligent direction allows brief insights into the actual process of making the film, which increases the sense of fly-on-the-wall intimacy. Smith, in particular, is at her most caustic when bossing around the onset photographer. Despite its cutesy title and premise, the film’s subjects avoid sentimentality to focus more on the practicalities of dealing with age.

If there is a failing, it’s that the film is all too brief. Clocking in at under ninety minutes, the viewer is left with the bittersweet sensation of leaving an enjoyable party too soon. Indeed, as charming as the conversation is, the topics never stray into controversial or uncomfortable territory. The dames’ discussion, for instance, only scarcely touches upon the male monsters they’ve encountered in their professional lives.

TEA WITH THE DAMES is an entertaining and light-hearted portrait of four people who have risen to the top of their chosen and very public profession. Their status as dames is ultimately less important than the fact that these women are close friends, professional colleagues and – particularly in the case of Dench and Smith – sometime rivals.