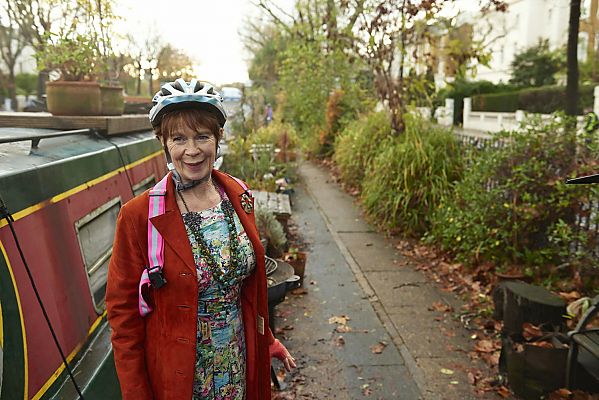 When Sandra (Imelda Staunton) finds out that her renowned husband has been having an affair for years, she fleas to her older, fun-loving, political hippie sister Bif (Joanna Lumley).

The “Best Age“ film emerged after the success of BROT UND TULPEN (2000) in which a woman travels to Venice and meets Bruno Ganz. All of the films of this new genre have the same message: it‘s never too late to to start agin. Richard Loncraine, the director of FINDING YOUR FEET, began his career with films about pirate radio Djs and the glam rock band Slade. The music selection to which a senior dance group performs in FINDING YOUR FEET includes some swing, rock ‘n roll and disco – a pop youth that took place sometime between the 40s and 70s. This was an era of a lot of cultural change and the film shows different lifestyles. The protagonists are Sandra (Imelda Staunton), who just became “Lady Abbott“, but discovers that her renowned husband has been having an affair for years. Her older, fun-loving, political hippie sister Bif (Joanna Lumley) takes her in in her council flat, and her friend Charlie (Timothy Spall), a friendly-chaotic hobbyist who lives on a house boat, becomes a potential romantic interest. It is clear who wins when the establishment and individualists encounter each other in a British film. The payoffs are better than the approaches and the plot wavers about and gets rid of all the obsacles a little too quickly– even when it‘s about wives with dementia. It will be interesting to see what will happen with the “Best Age“ films when the generation that grew up during the neoliberal 80s and after gets old, the “flexible people“ (Richard Sennett) who were always told they should keep reinventing themselves. Perhaps MAGICAL MYSTERY (2017) was a harbinger of whats to come: fun on one hand, and more stoic calm on the other.