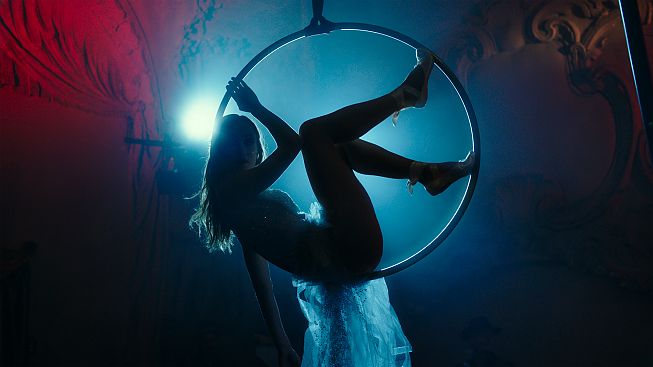 Silent Alexander begins a passionate affair with artist Paula. Shortly after, the beautiful stranger is dead, and Alexander loses it.

Alexander is a quiet man. The well-read classical music enthusiast prefers fixing bicycles alone in his workshop than being around people. The occasional casual sex with the barkeeper next door and a lot of cigarettes and schnapps carry him through. On the inside, the not-so-young man seems to have a lot to work on, which director Lena Knauss only hints at in her feature film debut. The purposefully unfinished looking apartment seems to mirror his interior. Alexander‘s eyes keep looking out the window across his home. This is where Paula, a mysterious cabaret artist, is. Like a moth to a flame, it drives Alexander out of the house and into her arms. There‘s an encounter that promises everything: passion, an awakening, and great love. But on the very next day the beautiful stranger is dead and Alexander loses it. Knauss films Alexander‘s obsessive visions with big gestures and doesn‘t refreain from pathos, letting him profoundly suffer and lie – anything to hang on to the relationship with Paula that only exists in his mind. Marlen, Paula‘s sister, sees through his game, while her parents are more than happy to believe the newly found son-in-law. They also want to reconstruct the image of the perfect daughter. Whether Knauss is really serious with her melodramatic staging of the ordeal of a man that can only be saved by the patient and very earthy Marlen, is not entirely clear. Or is she satirizing the obsession of our time with the superficiality of social media profiles in this chase of the ghost of a wild, passionate women?