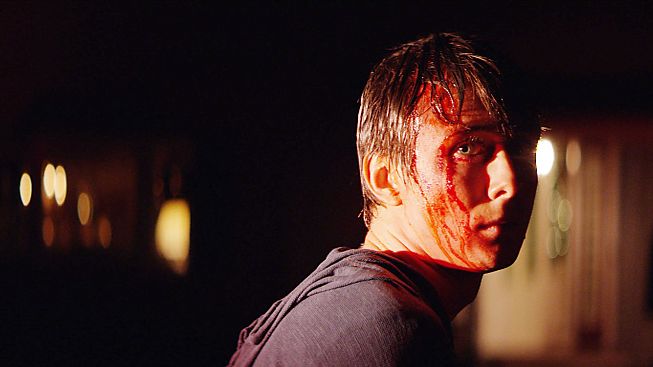 Philips deals with the loss of a boyhood friendship and the emotionally brutal consequences of young love under the guise of a nightmarish paranoid thriller.

Director Kevin Philips delves into several nightmarish layers in his debut SUPER DARK TIMES. We follow the blood trail of a dying deer who crashes into a classroom. Two policemen kill the suffering animal in front of the disturbed onlookers. There‘s a tragic brutality piercing out of the cool, still images. The film moves on to the fantastic young actors who are headed towards the next nightmare. While scrambled porn is seen on a blocked TV channel, the two best friends Zach (Owen Campfell) and Josh (Charlie Tahan) leaf through their yearbook and get stuck on the beautiful Allison Bannister: “I like her.“ “Yeah, I like her too.“

The way cinematographer Eli Born frames the faces of the characters and the shadows that are mirrored in the background makes SUPER DARK TIMES appear like a flashback into the melancholy memories of youth. The first quarter of the film is dominated by the driving forces and conversations of teens, then things escalate and adolescence becomes a nightmare. Phillips deals with the phase of a destroyed teen friendship and the emotionally brutal consequences of young love under the guise of a paranoid thriller. SUPER DARK mutates into a slasher in its finale, swords turn into phallic symbols, and the antagonist chugs a big glass of milk as if he were a Droog from A CLOCKWORK ORANGE. In the end there are two endings that have opposing moods that ask the same question: can you live on with scars?