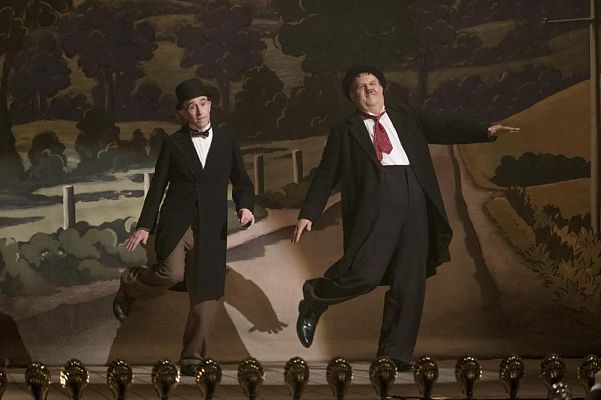 When Stan Laurel and Oliver Hardy embark on a theater tour across Britain in 1953, their glory days seem to be behind them and their artistic relationship is also strained.

Stan Laurel and Oliver Hardy were one of the most successful film comedian couples in the early 20th century and garnered fame that has lasted till today tdue to the reruns of their films on TV. When they embark on a theater tour across Britain in 1953, their glory days seem to be behind them. Even though many remember them, they‘re more likely to ask “aren‘t they dead?“ and the audiences aren‘t as big as the flowery promises from their agent would suggest. The hope for a planned film drive the pair along with the childish joy with which they try out new gags like in the good old days. But underneath the happy togetherness lies the unspoken memory of how Ollie “cheated“ on Stan years ago with a different film partner. When the tour does turn into a success, their visiting wives (Ollie‘s third, Stan‘s fourth) put an end to their dynamic of games, schnaps, and repression. A fight breaks out during a gala reception, Ollie (John C. Reilly) throws “you loved Laurel & Hardy, but you never loved me!“ at Stan (Steve Coogan) and in this moment one can feel that the two don‘t want to let go of the game, even if it doesn‘t seem possible anymore. The Laurel & Hardy personas could‘ve been reduced to mannerisms and props, but Reilly and Coogan show multi-faceted characters under the bowler hats and their disciplined interplay behind the scenes which inspired the humor and vice versa. And with all the melancholy in the film‘s second half, Jeff Pope‘s (PHILOMENA) screenplay never lets you forget just how funny Laurel & Hardy were together, so much so that the end of their tour also becomes an emotional goodbye to the film audience.