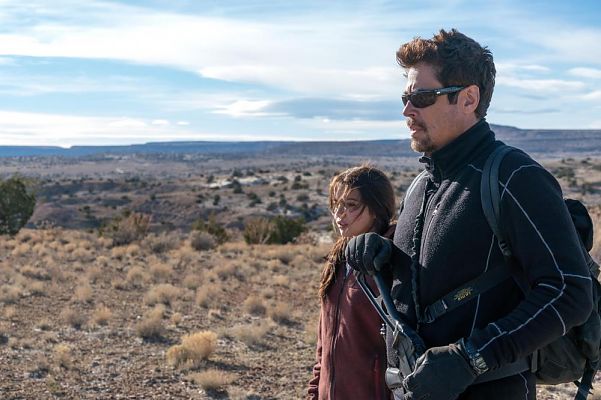 Sicario: Day of the Soldado

Stefano Sollimas (SUBURRA) directs the sequel about ruthless CIA agent Graver (Josh Brolin) and his mercenary Alejandro Gillick (Benicio del Toro) that revolves around the kidnapping of the daughter a drug lord.

Before Denis Villeneuve directed BLADE RUNNER 2048, he made SICARIO in 2015, an incredibly suspenseful thriller. In the film CIA agent Matt Graver (Josh Brolin) and mercenary Alejandro Gillick (Benicio del Toro) didn‘t have any scruples using dirty methods and automatic weapons against Mexican smugglers. SICARIO 2 tightens the bolt even further. Emily Blunt‘s FBI women, who stopped the men in the first part, doesn‘t appear here. The cartels have now allied with Muslim terrorists there are now suicide bombers crossing the border along with drugs and Mexicans seeking jobs. That‘s why the US military gives Graver and Gillick all of their arsenal and free reign on their mission. You need drones, a hummer, and heavy machine guns for a war. The mission is also very personal: in order to kindle the conflict between the two cartels, the antiheroes are supposed to kidnap Isabel, the bratty daughter of the gangster boss who also happens to be the man who let Gillick‘s family be killed. When he escapes with her after an ambush, Gillick has to decide whether Isabel is more to him than a means to an end.

In addition to spectacular action sequences, director Stefano Sollimas‘ (SUBURRA, TV show Gomorrah) main focus is family. Whether it‘s the price that these old dogs have to pay for their fight or the young cartel aspirants finding a new community within the organisation, almost all of the characters have emotional depth and wrestle with their morals. Besides one twist that‘s hard to swallow, the fusion of these layers work and lets you forget that the brutal fight against Mexicans reflects the real president‘s views. Soldado should return for part 3.