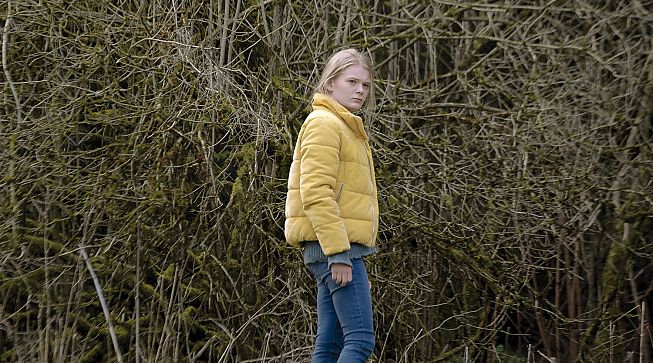 Marlene is plagued by nightmares. With her daughter Mona she visits the hotel that she has seen in her sleep.

Marlene lives with her teenage daughter Mona in Hamburg. Their relationship is close. Marlene, an orphan, just has Mona. Not least because Marlene’s worrying nightmares brings them closer together. Sleep for her is a ghostly demon that invades her and steels some of her memories, breath, and abilities. Her daughter Mona holds her mother tight in these moments, catches her, leads her out of it. Inhale, exhale. The roles, protector and protected, seem to be reversed. One image from Marlene’s dreams is a hotel which seems to recognize in a newspaper ad. It takes her there, to the Harz Mountains, and among the dark forests Marlene falls into a nightmarish sleep which she can’t seem to wake up from after a strange encounter with hoteliers Lore and Otto. She goes to the hospital. Mona goes to her mother and finds herself being plagued by terrible nightmares herself that lead her to a dark family history, in which Trude, a ghost woman, gradually takes form.
The feature-length debut of Michael Venus plays with fairy tale and horror elements and elegantly weaves in German history and current events. The ghostly factory, the series of suicides committed by the men of the village, wooden masks, and animals give us a lot of creepy material, just like the loyalty of the villagers who believe they experienced a national defeat and want to protect the village, no matter the cost. The excellent cast, with Swantje Kohlhof as Mona, Agata Buzek as Trude, and Sandra Hüller as Marlene and the artful images between reality and nightmare offer a subtle kind of horror. Ominious being Trude isn’t the monster here, it’s rather populism, misogyny, and Mona’s fear of “going crazy” like her own mother.