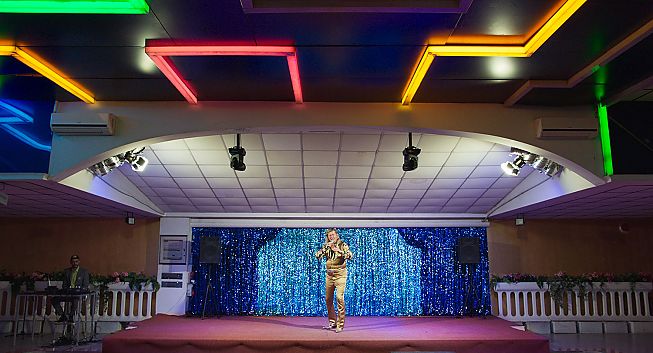 Michael Thomas sings and plays pop singer Richie Bravo moves around wintery Rimini. While the Adriatic coast is packed with tourists in the summer, there are now wisps of fog. Snow is falling on the palm trees and refugees are crouching under beach ...

Uli Seidl‘s RIMINI is actually about yearning and folk songs, but it‘s also about the old ideal of an egomaniacal artist that is crumbling. Sometimes art overtakes reality, and so the director himself is in the middle of a controversy about the exploitative tendencies in the film. On September 3rd of this year, the magazine “Der Spiegel“ published an article about the film shoot of the Austrian filmmaker‘s newest film SPARTA that is set to debut in festivals in the fall. SPARTA was filmed in a small town in Romania with unprofessionals in supporting roles. Typical of Seidel. According to Spiegel there are accounts from the child actors, their parents, and those present on set about the families not knowing about the content of the film and that the children were subjected to violent situations during production. Seidl released a statement that contradicts this, without going into the described situations in detail.

Uli Seidl‘s films are set in the margins of society, in the abysses. There‘s violence, sex, loneliness, madness. This isn‘t the first time that Seidl‘s work with unprofessional actors has been questioned in this context. The accusations of the SPARTA shoot are concrete and extreme and need to be clarified – on a large scale. Film shoots with children and unprofessional actors are often not supervised and planned enough. There are countless examples of this, one of them being Sarah Polley‘s experience as a child actor in Terry Gilliam‘s THE ADVENTURES OF BARON MUNCHHAUSEN.

RIMINI and SPARTA are connected by their protagonists and were originally meant to be one film. It is about two brothers. One of them lives as a washed up folk singer in Italian Rimini. The other one is a youth sports trainer in Romania who has pedophilic thoughts. The father with dementia is in a home in Austria. Michael Thomas sings and plays folk singer Richie Bravo who drifts around wintery Rimini. While the Adriatic coast is packed with tourists in the summer, there are now wisps of fog. Snow is falling on the palm trees and refugees are crouching under beach hut roofs. Richie passes them, in a fur coat, the shoulders up. He goes to hotels, meets fans. Sleeps with the older women. Gets drunk and sings. Richie sells the yearning for true love in his music and as a sexual service, but money is tight and the good times are over.

Seidl‘s imagery is iconic, atmospheric and gentle and harsh at the same time. RIMINI thrives on it. Richie‘s robust body in a tight gold suit, long, blond streaked hair, standing in front of a panoramic window singing fervently. On the other side of window, cars are speeding. Time doesn‘t stand still, and Richie can‘t keep up. His language is racist, his perspective on the world is self-serving. When his daughter, who he never took care of, appears, she doesn‘t want reconciliation like Richie fantasizes but rather money as reparations. Richie takes care of it, but doesn‘t understand what his daughter is reproaching him for, just like everything that doesn‘t fit into Richie world. While he gets drunk and pities himself, he doesn‘t see the connection to the people around him, to his daughter and the refugees that will soon get set up in his garden. Just like them, the yearning for a better life has taken him to Rimini. Richie‘s loneliness isn‘t that of an aging artist, but of one who is behind the times. There‘s no space for the Richie Bravos anymore, except for in nostalgia.