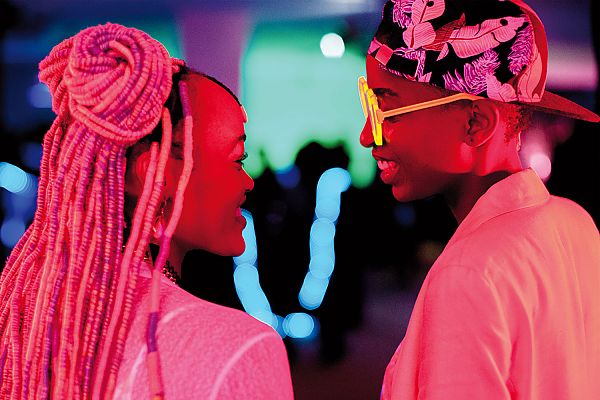 Kena and Ziki are two young women from Nairobi who fall in love – despite their different personalities, rival families, and the people in their environment who can‘t wait to badmouth them.

Two lovers who risk everything for their relationship. Seen that often? Definitely not like in RAFIKI!

Kenyan director Wanuri Kahiu‘s film starts with colorful credits (a rarity today, regardless of the color tones) and sweeping Afro-pop, rebutting all the fears that a lesbian love drama from Kenya that I inevitably had from the start. RAFIKI makes a mark due to its cheery aesthetic and its dedication to its protagonists and their story. They‘re experiencing a situation that is as old as storytelling itself – it‘s all the more moving that they can still happen today: Kena (Samantha Mugatsia) and Ziki (Sheila Munyiva) are two young women from Nairobi who fall in love despite their different personalities, their rival families, the people around them who can‘t wait to talk about them behind their back, and because it isn‘t allowed for restrictive, heteronormative, and macho reasons and it can even turn to violence.


It‘s no wonder then that Kena‘s friend Blacksta (Neville Misati) thinks he‘s got a serious shot with her, even though she‘s the only tomboy with short hair skating around town and is taking stolen glances at Ziki. She doesn‘t just have one of the best hair styles in film history, she also has her own ideas about life. She doesn‘t want to keep their blossoming romance hidden and she also wants to have a better career than what‘s expected out of a “good Kenyan girl.“ Why can‘t they hold hands if they want to? Why become a nurse when you can become a doctor? Kena, who is more aware of the seriousness of their situation, isn‘t always understanding of that. And so the young love threatens to fail because of their different ideas and fears.


Whether it does have a happy ending is something you should find out on your own. Many of the supporting characters remain one-note and are sometimes cast with overly engaged actors – which is actually very entertaining. But even the somewhat truncated side plots deal with different aspects of social life in Kenya and make it it clear that there are other rules for women than there are for men. RAFIKI is also a moving love story and underscores that “love is colorful“ with its bright images filled with all the colors of the rainbow.