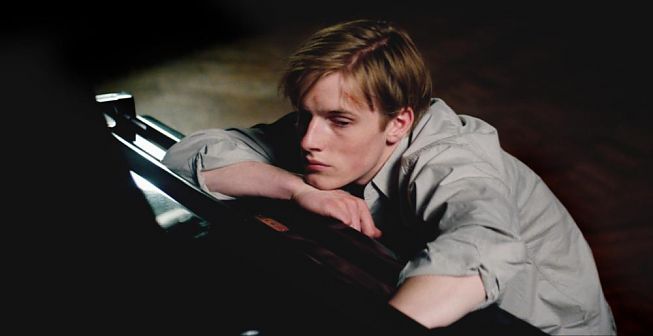 19-year-old pianist David is accepted to a music academy and is on the verge of something great, but the pressure he puts on himself keeps getting bigger.

Genius and madness lie close to each other, at least in literature and cinema, where artists are often described as having failed at their talent and become mad. Sabrina Sarabi‘s debut PRÉLUDE, which has a spectacular troupe of actors, also has a figure like this. At the center of it is Louis Hoffmann, who plays 19 year old pianist David who has been accepted to a music academy and is bound for success. Ursina Lardi is the piano teacher who challenges him, criticizes him, and is both enthusiastic about his abilities while and disappointed by his negligence. Liv Lisa Fries is the girl at David‘s side, at least in the moments in these weeks or months that the film is set in. It isn‘t so clear when that is, because Sarabi doesn‘t follow a classic linear structure for long stretches of time, she mostly structures it in a loose, associate, eliptical way. The pressure on David keeps growing, less from outside and more from himself. His attempts at distracting himself with electronic music get more and more excessive. Those scenes are impressive and is underlaid by excellent sound design that hints at David‘s increased tension, finding the nervous rhythms with the clack of ping pong balls, leaving it unclear for David and the audience whether what is being seen and experienced is still real or already a sign of his madness. That goes on for 70 minutes, for 70 minutes PRÉLUDE is a daring, stylistic, unusual film before Sarabi loses her nerve in the last 20 minutes. What was just hinted at and purposefully left ambivalent is now made clear, leading David to a clear, obvious, and unsatisfying end. It is all the more regrettable because what came before was so good.