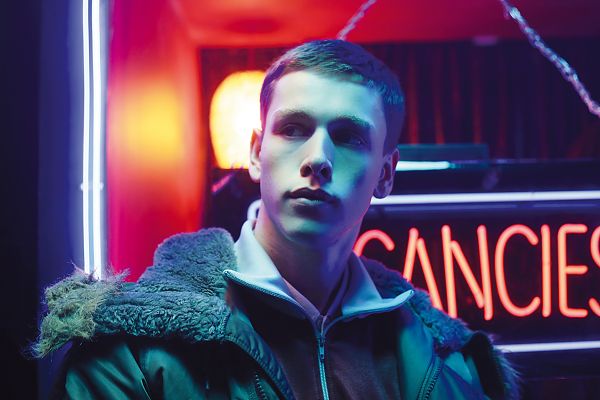 Jim goes to London searching for adventure and gets involved with the “Raconteurs,“ a group of elegant male escorts. They take Jim under their wings and train him to become a master of “post-coital conversation.“

Actor Harris Dickinson’s pre-Hollywood apprenticeship was brief, almost as brief as that of Jim, his Postcards from London character, who seems to acquire learning by speedily flipping through a few books in order to become versed in cultural intellectualism for the post-coital conversations that middle-aged men apparently want from 18 year old male prostitutes. Dickinson turned in a (rightfully) well-received performance in 2017’s Beach Rats, as well as a few episodes of British telly, a sci-fi thriller that roughly four people saw, a TV dramatisation of the John Paul Getty III kidnapping (the version that didn’t have to replace Kevin Spacey with Captain von Trapp), before signing on to appear alongside Angelina Jolie in the sequel to Maleficent. But before he became part of the Disney family, there was Postcards from London.

Any expectations of naturalism evaporate instantaneously once Postcards from London begins. Jim is a wide-eyed, handsome lad from the sticks (or rather, Essex), who arrives in London with a vague plan to make something of himself. His beauty is a commodity, and he quickly falls in with a gang of high class male escorts who train him in the ways of being a paid companion who can not only offer pleasures of the flesh, but also those of the mind, describing themselves as “raconteurs.” The grandeur of London is oft-mentioned but never glimpsed, with the story (and I use this term charitably) unfolding in a handful of interior locations, whose set design runs the gamut from minimalist to abstract, as though the production design team’s budget was covered by the loose change they found behind the couch. These enclosed spaces give the film an insular quality, and yet your eyes might well take in the backdrops with some detail since there is often not much else on screen that captures your attention.

This is a malnourished piece of work that attempts to be lyrical and poetic, yet comes across as stilted and awkward, particularly with its dialogue. Harrison Ford’s remarks to George Lucas during the production of STAR WARS spring to mind: “You can type this shit, but you sure can’t say it.” Kudos to Dickinson, since it takes a tangible talent to make these lines sound even vaguely organic, and his abilities obscure the fact that nobody actually talks like this, aside from the most pretentious of first year university students attempting to impress each other. At least Dickinson’s Jim has been given a few character traits (and he’s able to graft them into a passable character), with his abject sensitivity so intense that he’s unable to take money from his significantly older clients because he feels bad about it (which has a whiff of middle-aged fantasy). He’s also so overwhelmed when in the presence of certain artworks that he imagines himself within the piece with such ferocity that he swoons (an actual, though debated condition known as Stendhal syndrome). Jim’s fellow prostitutes don’t fare as well in being fully-realised creations. They’re largely interchangeable as characters, only differentiated when they admirably attempt to tackle their dialogue and so you’re able to identify them by accent, becoming the French one, the Spanish one, and so on.

The film is rather pompously divided into parts, each with its own framed title card, allowing for a sense of relief when one is announced as “the last part.” It’s in this part that Jim encounters Paul (Leemore Marrett Jr.), a shunned former member of the gaggle of prostitutes who suggests that there’s little nobility in what his old colleagues do, and that they’re merely “dressing it up as art.” Is this a sly nod to the members of the audience who will immediately think that this is precisely what POSTCARDS FROM LONDON is doing? Whether or not Dickinson opts for the Hollywood mainstream and the commercial (and hopefully critical) acclaim that can come with it, POSTCARDS FROM LONDON might pick up future viewers in the form of besotted (and then bewildered) teenage girls who want to watch the earlier work of that hot guy from Maleficent II. They, like you, like me, might come away from the film suspecting that they didn’t quite get it. But it should also be noted that there isn’t necessarily much to get.