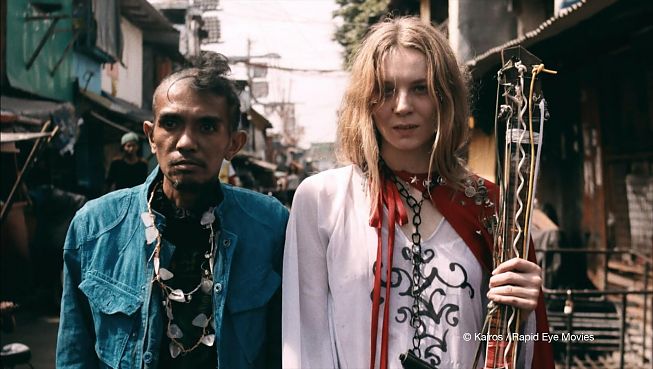 Orpheus becomes ORPHEA: renowned German experimental filmmaker Alexander Kluge and his Filipino colleague Khavn De La Cruz do a gender swap of the ancient Greek saga. Instead of a conventional retelling, they offer visual and musical meditations that orient themselves on the material‘s motifs but go a very different path.

Musician Orphea (Lillith Stangenberg) can sing very well – and she can also scream and snarl. Unlike Orpheus, who can bewitch the Gods with his voice, her music isn‘t there to be liked. Her partner Euridiko is always standing by the stage wings – until he isn‘t. Like in the saga, the protagonist is pulled into the underworld to save their love. But that isn‘t enough for her: she wants to bring all the dead people back.

ORPHEA tells this story in such a fragmented way that you often don‘t know what to think. Every minute is challenging for the viewers. Kluge‘s unwieldy vignettes are harder to digest than Khavn‘s enchantingly mysterious images, but they only go together: Khavn shows the “performance,“ the journey to Hades. Kluge, on the other hand, shows the “rehearsal,“ the heroine‘s preparation. Stangenberg reads and practices, thinks and fights. We also see her as an actress dealing with a world that usually doesn‘t view women as active agents but rather as objects of desire. Kluge also uses drastic images to connect to themes like war and escape.

ORPHEA is a breathless ride through songs, artworks, and associations: a film that often disgusts and disturbs yet does cast a spell.