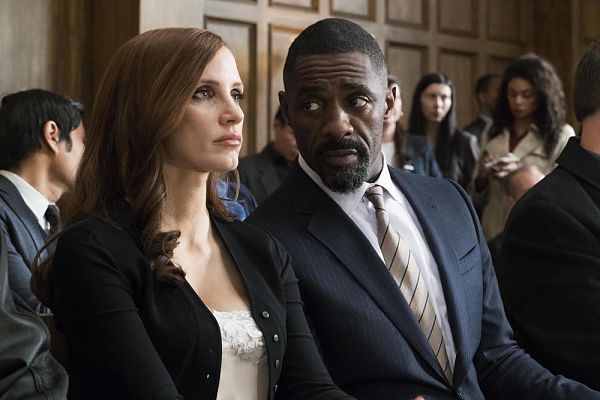 After ending her skiing career, Molly Bloom causes quite a stir in Hollywood as an underground poker queen until she runs into trouble with the Russian mafia and the FBI.

Molly Bloom, the name alone promises some glamour! An impression which is reinforced as soon as Jessica Chastain floats on the screen with her evening wear. Chastain plays the titular protagonist who causes quite a stir as an underground poker queen. The story is based on the memoirs of Molly Bloom who organized exclusive and illegal poker championships for the rich and beautiful in Hollywood after ending her skiing career due to an injury. The intelligent and ambitious Bloom makes quite a bit of money doing this until she gets in trouble with the Russian mob, is caught in the crossfires of the FBI, and has to stand trial. The plot unfolds in two timelines: Bloom‘s rise as a poker diva and the trial against her. During the trial Bloom has to decide with her lawyer Jaffey (Idris Elba) whether she should make the names of celebrity poker guests known or not.

The story itself is interesting, but the two-and-a-half-hour running time isn‘t always riveting. The director is Aaron Sorkin, the creator of “The West Wing“ and the screenwriter of the prize-winning SOCIAL NETWORK. MOLLY‘S GAME is his debut as a director and as if often the case with leading writers who direct, Sorkin clearly puts the focus on the dialogue. The‘re Bloom‘s explanatory voice over commentary along with many fast-paced conversations and there‘s so much dialogue it gets tiring. What‘s refreshing is the engaging performance by Jessica Chastain and the striking guest appearance of Kevin Costner.