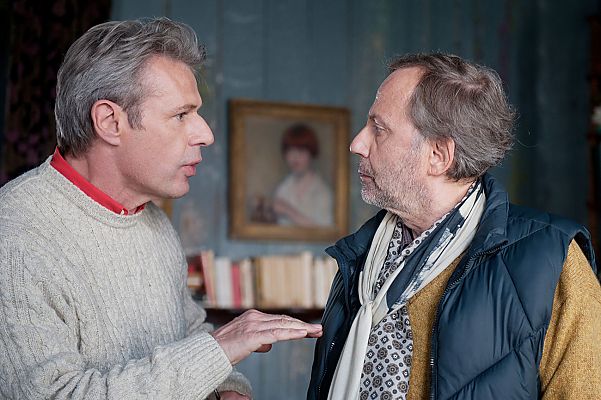 The famous actor Serge Tanneur has quit acting. His old colleague Valence Gauthier tries to convince him to perform in Moliére’s play “The Misanthrope.” A highly amusing duel between two theatre lovers, egomaniacs, and misanthropes ensues.

If you are in the mood to watch attractive, clever, and witty adults engage in a battle of words about nothing while still delivering on the really essential things in life, you’re in the right place with MOLIÈRE. Serge Tanneur (Fabrice Luchini) plays a former stage actor who has exiled himself to an old house on the Île de Ré after suffering from depression. He lives a life that resembles a mixture of a retiree and a hermit –he reads, paints, and takes long bike rides along the canals. One day his old friend and colleague Gauthier Valence (Lambert Wilson) comes looking for him. Gauthier found his success playing the TV doctor Dr. Morange, and travels to the island to convince his old friend to star in his production of Molière’s The Misanthrope. Serge categorically rejects the offer but with his friend’s urging he decides to at least consider the possibility. Gauthier cancels his commitments in Paris and the two start to rehearse. Every day the two bump heads in their rehearsal sessions, but when they are not rehearsing or quarrelling, they go on long bike rides, eat together, and get to know Serge’s attractive Italian neighbour Francesca (Maya Sansa).
CYCLING WITH MOLIÈRE is like a party for the two main actors Fabrice Luchini and Lambert Wilson, who revel in playing two witty egomaniacs as they squabble with great enthusiasm. Luchini pulls out all the stops as the grumpy Serge with his three-day beard. Lambert shifts effortlessly between the heartthrob TV doctor to a classy stage actor. The two actors find their rhythm as they delve into Molière’s dialogue and take seriously the play’s figures and topics in a way that brings the text into the present.
The love of theatre is evident throughout the film. The director and author Le Guay gives space for the two main characters to rehearse the first scene of The Misanthrope repeatedly to the point thato that the audience feels like it is participating in the various read-throughs of the theatre piece. Depending on the day and who is playing Alceste and who is playing Philinte, the scene changes and develops, becomes darker or funnier and for each repeated session the piece makes more sense. Together with the actors, the audience, too, delves deeper into the text. CYCLING WITH MOLIÈRE is a refreshing tribute to misanthropy. As the film develops it becomes clear that the relationships portrayed on screen mirror the relationships in the theatre piece. Together the main characters are a wonderful pair of old curmudgeons.