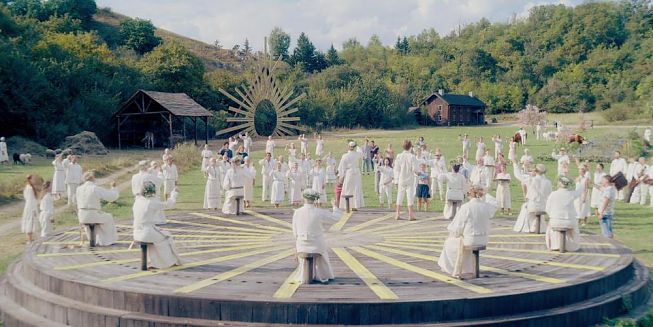 A group of college students travel to Northern Sweden in order to study a pagan community. Ari Aster boils down high-culture cult motifs into ornaments, fun, and shock effects.

Only one year after director Ari Aster broke the horror genre with his debut feature HEREDITARY (2018), the nascent auteur has now followed up with MIDSOMMAR, another home-run in his field of nightmares.

Set in a remote village commune in Sweden, MIDSOMMAR is a sun-drenched trip into the darkest corners of individual and collective psychology. The film tells the story of Dani Ardor (Florence Pugh), an American college student who in the film’s opening sequence experiences a shocking loss. By now, fans of HEREDITARY would expect such a plot device, but Aster’s brilliant visual storytelling makes the moment still unsettling and raw.

Traumatized and facing unbearable grief, Dani seeks support from her boyfriend Christian (Jack Reynor). But Christian, an anthropology student, was already planning to break up with Dani and join his friends on a trip to Sweden to experience a midsummer celebration. Months later, thinking that Christian still loves her, Dani insinuates herself into the trip. She joins Christian and his friends including Pelle (Vilhelm Blomgren), their Swedish host, who has invited the Americans back to his ancestral commune to share his culture and beliefs.

From the moment of her arrival into Pelle’s village, where the sun never sets and pagan rituals mark the long days, Dani’s life is literally turned upside down. In this psychedelic world of mushrooms, maypoles, and inner melancholia, the relentless bright light becomes a further disorienting force, affecting her already fragile state.

MIDSOMMAR shares similar elements with Aster’s first film, which explored themes of grief, mental illness, and family legacy. But where HEREDITARY’s through-line was about the horrors of genetic destiny, MIDSOMMAR explores the fateful seduction of adoptive family. In this isolated and insular world, outsiders are needed to replenish the tribe. But the various ways in which they do so, is where the seeds of terror are planted and grow.

Bound to become a folk horror classic, MIDSOMMAR takes a page from its 20th Century ancestor THE WICKER MAN (1973). It’s horrific and humorous, a wond’rous sight of the midday sun at midnight. With MIDSOMMAR, Aster demonstrates yet again how an auteur can milk a story — every film a bucket full.