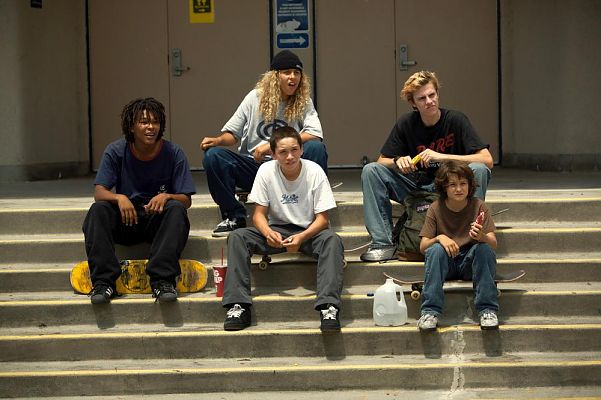 13-year-old Stevie befriends a small gang of cool skaters who are all older than he is. MID90s is one of the most honest looks at teens from bad environments in modern US cinema.

Jonah Hill clearly shows the inspiration for his directorial debut when Harmony Korine (GUMMO) makes an appearance. His film is never as drastic as KIDS or KEN PARK, but in Hill‘s coming-of-age film minors do smoke on camera. MID90s is one of the most honest looks at teens from bad environments in modern US cinema. Even with the Super Nintendo and the Nas shirt, the nostalgic references remain pleasantly subtle. MID90S isn‘t a trendy nostalgia fest. As we look back on the 90s, the protagonists look towards where teens tend to look at: the future. The glances meet.

13 year old Stevie (Sunny Suljiy) befriends a small gang of cool skaters with nicknames like “Fuckshit“ who are all older than he is. In an attempt to emulate them, the little guy makes his first experiences and mistakes with girls and drugs. The oldest member Ray (Na-Kel Smith) becomes a kind of mentor for the newly nicknamed “Sunburn.“ He wants to become a professional skater and is looking for contacts who are older and more experienced than he is. Jonah Hill highlights their hang-outs with a mix of 90s-Hip Hop and a score by Trent Reznor and Atticus Ross. Generations communicate, and we look through the window of the 4:3 format and the grainy 16 mm aesthetic of MID90S. The masculinity discourse that is carried out within the group dynamic and the relationship between Stevie and his big brother Ian (Lucas Hedges) in particular could not be more current.