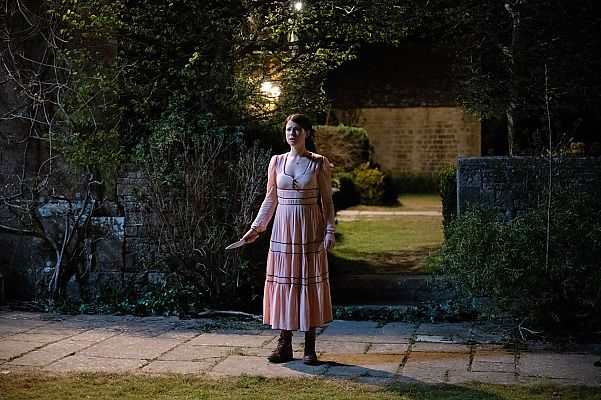 Harper has come to the countryside to recover from her relationship with an aggressive partner, but the men in the rural idyll aren‘t particularly sympathetic either. Modern folk horror directed by Alex Garland.

Harper goes to the countryside and rents a luxurious manor for two weeks in the small village of Cotson. She likes the fact that she won‘t be around many people. The young woman (Jessie Buckley) hopes to process the traumatic end of her marriage while taking long walks in the nearby forests, but Harper encounters an animalistic screaming man (Rory Kinnear) in a closed railway tunnel while on her first stroll. He follows her and shortly thereafter he is in front of her vacation home. Even though the police arrest him before Harper experiences something more grave than a fright, she is far from being as calm about it as the men from the village are who she talks about it with. From that point on, the situation escalates and Harper has a night that turns into a real nightmare.

MEN has a very sparse plot and at its center is a creatively depicted casting gimmick and a very pithy feminist subtext (the trailer and press photos don‘t hide the gimmick, but it‘s best to experience it while watching the film). To say that the film would be just as meaningful if it were half as long isn‘t quite wrong, but it is misleading. The plot would be the same, but MEN shines because of its atmosphere. It begins with the oversaturated green of the forests where Harper can brielfy escape her traumatic memories that are seeped in a red haze. As soon as the supposed idyll becomes threatening, Alex Garland (EX MACHINA) interrupts Harper‘s story with long takes in which colorful lighting showcasing occult symbols and a character undergoes a transformation bit by bit. These scenes evoke the more experimental films of David Lynch and THE GREEN KNIGHT and set the scene for a finale that will ensure some open mouths and unsettled squirms in cinema seats. With a bit of background knowledge about the meaning of the symbols, Harper‘s end seems more and more logical and optimistic in hindsight. MEN will polarize and it surely had the potential to be more subtle and differentiated with its themes. However, the film is a cinema experience that reverberates and provides a lot of things to discuss.