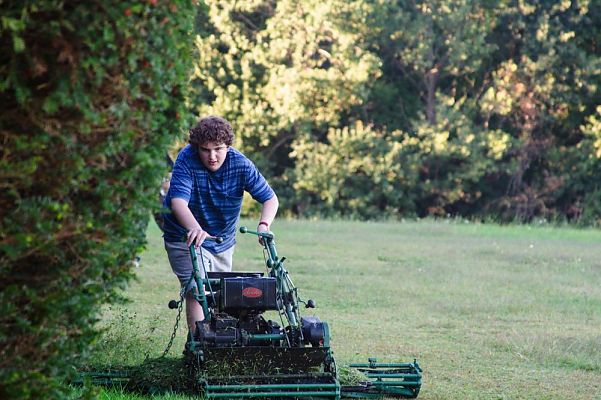 Measure of a Man

Bobby Marks (Blake Cooper) is looking forward to the summer. Before he makes his way to his vacation house with his squabbling parents, he holds his breath and dives underwater in his bathtub. He prepares for the pending discomfort. During the first vacation breakfast Bobby‘s father bullies him because of his weight and the village bullies are waiting for their new victim at the local fair. The only oasis seems to be his long-time friend Joanie Williams. The fat boy and the girl with the big nose are an inseparable outsider duo. Jim Loach‘s film has all the ingredients of an archetypical coming-of-age film but is much sadder than most of the films in the genre.

Joanie suddenly goes away for some time, Bobby‘s father has to go back to New York because of work and almost leads his family to ruin. The cool boy from camp and Dr. Kahn (Donald Sutherland) seem like mentor figures, but Bobby is still alone in the end. He sees that when Joanie suddenly returns with a new nose. MEASURE OF A MAN ends on a cathartic self-empowering still image and doesn‘t seem aware of its contradictions and absurd approach. Roach‘s film keeps trying to make connections between private and political oppression. The Vietnam War and the women‘s movement are touched on and a Holocaust survivor hugs an overweight boy. In the end Bobby dares to jump into the water without his shirt in front of everyone.