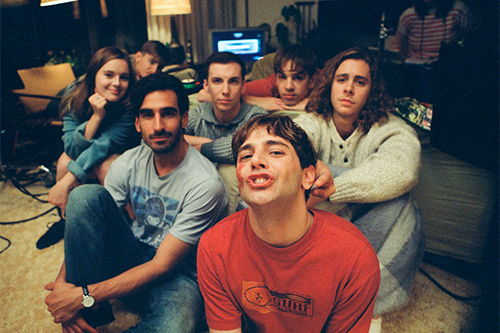 Maxime wants to migrate to Australia for two years. His friend Matthias, with a job and a girlfriend, struggles with the goodbye more than expected. The new Dolan: quick dialogue, a boisterous party atmosphere, and a great soundtrack.

You can argue about whether Xavier Dolan really is the wunderkind that he has been labeled as ever since his 2009 debut I KILLED MY MOTHER catapulted him to indie fame. Back then he was barely 20, full of energy, and unstoppable. And till today the enormous energy and passion he invests in every film can be felt in the cinema – even if both his last films leave much to be desired. In MATTHIAS & MAXIME, the impetuous Canadian proves that he has learned from his missteps and has made an uninhibited, atmospheric drama with a lot of verve, heart, and a fabulous soundtrack.

Dolan plays Maxime, who has a prominent birthmark on his face and wants to move to Australia for two years to get some distance from his alcoholic mother. But this change proves to be bigger for him and his friends than he expected. Matthias (Gabriel d’Almeida Freitas), in the prime of his life with a job and girlfriend, finds the goodbye especially hard, especially after he and Max kiss after a lost bet and suddenly find there‘s more on the line than the loss of an old friendship. MATTHIAS & MAXIME develops its dynamic out of the interplay between relaxed party atmosphere, quick dialogue, and perfectly times music cues on one hand an a few precious, sensitive moments of togetherness on the other. Even if the material isn‘t really new for Dolan, it is still a joy to be with him and his characters on this tricky, deeply emotional rollercoaster.