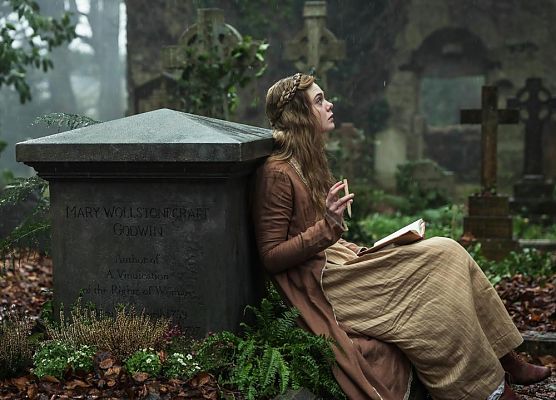 Mary Wollstonecraft is only 17 when she falls hard for the romantic – and married – poet Percy Shelley and runs off with him and her sister. She writes her classic novel“Frankenstein“ at 21.

The poster for MARY SHELLEY, the biopic detailing the life of the author of Frankenstein informs its prospective audience: “Her greatest love inspired her darkest creation.” Does this mean that Mary utilises ye olde Tinder to find a tall man with a flat head, greyish-green skin and bolts in his neck, whose hobbies include being chased by angry pitchfork-wielding villagers? This isn’t the case, although this imagined scenario could well be more compelling than the film we’re presented with.

We first encounter Mary Godwin (Elle Fanning, sporting a commendable British accent) as she scribbles prose in a raincast London graveyard in the early 1800s, like one of the earliest goths. She’s inquisitive and personable, though slightly downtrodden by her duties assisting her father William Godwin (Stephen Dillane) and her shrill and vaguely hysterical stepmother Mary Jane Clairmont (Joanne Froggatt) in William’s bookshop. Mary’s preoccupation with her writing leads her kindly father to ship her off to cousins in Scotland, where, as he tells her, “The solitude will give you time for introspection.” During her Scottish sojourn, she encounters the poet Percy Bysshe Shelley (Douglas Booth) who sets her loins all aquiver. He follows her back to London, and tortured love ensues until it’s time for her to write Frankenstein, which she seems to be able to rattle off in about five minutes. The lovers embrace in the rain, the orchestra soars, and yet any attempt at an emotional connection with the audience feels unearned and manufactured.

Of course, all cinema is manufactured, but the trick is that the audience doesn’t notice this. You’ll notice it while watching MARY SHELLEY. As Mary and Percy, Fanning and Booth are rather dazzling, elevating the material to a level it would have struggled to get to otherwise. Tom Sturridge’s sporadic appearances as Lord Byron give the story a bit of sharp-edged breeziness, which is a welcome diversion. Despite the admirable efforts of the cast to breathe some life into the narrative, it remains utterly lifeless. The film seems determined to paint Mary as a quietly passionate creature, so it’s with a shrug that you’ll wonder why her story is so loudly dispassionate.

The strained suspension of disbelief required to swallow the idea that a seminal piece of literature could be born from such frothiness is only one of the frustrating aspects of director Haifaa al-Mansour’s film. Percy is presented as a charming lothario, attracted to Mary in part due to her rejection of conformity and convention, and yet his rebuffed attempts to induct her into the concept of free love (ye olde open relationship) are settled with disheartening speed and amicability. Any curiosity as to whether or not Mary Godwin will end up with Percy Bysshe Shelley has already been settled by the film’s title.

To crudely paraphrase various examinations of the story of Frankenstein, certain aspects of Victor Frankenstein (the monster’s creator) were modelled on Percy Bysshe Shelley, such as his periodic contempt for and abandonment of his creations (his children). Abandonment is clearly a key theme, with Mary feeling abandoned by Percy, being disowned by her father after taking up with Percy, and with her own mother dying shortly after giving birth to her. While her greatest love might have inspired her darkest creation, the film doesn’t quite paint this picture. Mary and Percy’s time together was fairly well-documented, but so many of the details of the film are (necessarily) speculated. Surely the filmmakers could have speculated further to result in something more substantial? The cast do their very best, but Mary and her darkest creation deserve better.