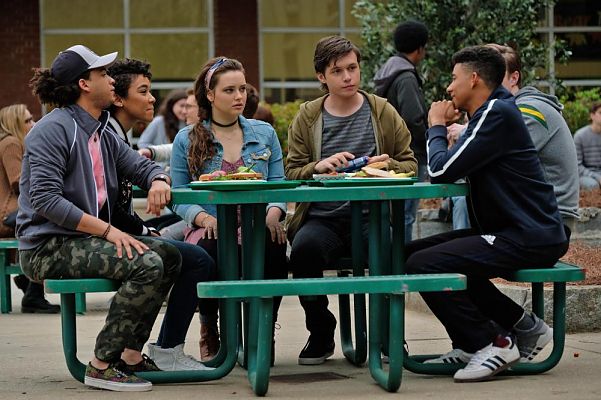 Simon is a normal average US teen. The 16 year old hasn‘t told anyone he‘s gay though. When a fellow student talks about his own homosexuality online, Simon establishes contact with the anonymous person.

Few genres are such fixtures of US film culture like the high school comedy – and few genres are this enduring. Since the 80s at the latest, every generation has had their own defining representatives: from THE BREAKFAST CLUB to CLUELESS to MEAN GIRLS. LOVE, SIMON is the newest contribution that gives the genre a contemporary update.

Simon (Nick Robinson) is a normal, average US teenager: he lives in an Atlanta suburb with his mother (Jennifer Garner), father (Timothy Olyphant), and his little sister and there are no big problems. He has a close best friend, a nice clique, and everything is going well in school. But the 16 year old hasn‘t told anyone that he‘s gay. When a fellow student talks about his own homosexuality anonymously online, Simon emails him and is fixated on finding out who the young man is whom he is starting to fall for.

The fact that director Greg Berlanti adapted Becky Albertalli‘s novel „ Simon vs the Homo Sapiens Agenda“ using the typical teen convention is indisputable. That‘s exactly the strength of LOVE, SIMON. There hasn‘t been a mainstream film with a story like this – largely predictable, sweet, and entertaining – with a gay protagonist until now. The film doesn‘t problematize or go too deep and that‘s the point, the film addresses kids that are at the center. Everyone else should also let LOVE, SIMON‘s charm warm their heart and regret that a story like this didn‘t exist when they were young.