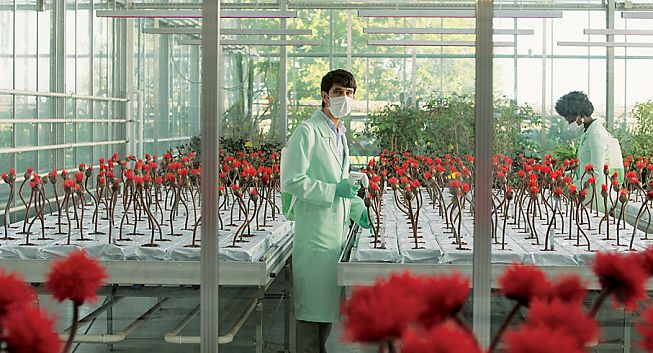 Alice and her team of biotechnologists have developed a red flower with a smell that causes happiness. “Little Joe“ flourishes well, but the vast amounts of pollen that the supposedly sterile plant produces is strange….

While genre filmmakers, especially in horror, like to expand the boundaries of what can be shown and tighten the emotional screws, Jessica Hausner has been headed towards the opposite direction for years. Her “horror“ film HOTEL (2004) showed dark corridors in an ominous hotel by the forest and scaled back shock effects and suspense so that just a vague, but also interesting unease is what remains in the end. In her “melodrama“ AMOUR FOU,she depicts the double suicide of Heinrich von Kleist and Henriette Vogel as the result of thoughtful decisions and long negotiations. In LITTLE JOE the sci fi horror motif of body snatchers – in this case they are spirit snatchers – gets a similar treatment. Alice and her team of biotechnologists have developed a red flower with a smell that can make people happy, which Alice has named after her son “Little Joe.“ “Little Joe“ thrives and seems to fulfill its promise. What‘s strange are the huge amounts of pollen that the sterile plant produces. Colleague Bella, who has mental problems, as everyone knows, even claims that coming into contact with the pollen makes people strange…

Hausner stages scenes that are extremely undramatic, almost emotionless in ways that are pretty, colorful, and almost manically precise. The changes that Little Joe causes – if it does – are so minimal they can barely be named, let alone be proven. And so, like the last thought shortly before anesthesia, the feeling of unease creeps in – like something is a bit strange in the world, like people aren‘t quite themselves, like it isn‘t actually clear who is making the decisions and where the needs that you think are your own actually come from.