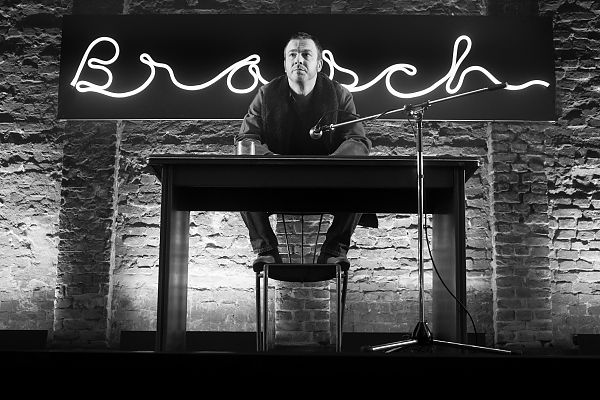 Thomas Brasch died 20 years ago. When he was buried in the autumn of 2001, he was almost forgotten to the public. He was once one of the most in demand German writers, for a time he was even one of the most performed playwrights. This was in the late 70s, early 80s, shortly after his migration from East to West, from Berlin to Berlin. Everything seemed to work for him then. The culture pages raved about him and so did the TV channels and stages. He was constantly publishing, garnering award after award. And then he fulfilled his actual artistic dream: he directed his first feature film. ENGEL AUS EISEN, set during the Berlin Blockade in 1948, which was a cryptic and sentimental gangster ballad and played in competition at Cannes in early 1981. What a triumph for the ex-matriculated film student! When he received the Bavarian Film Prize from Franz Josef Strauss that same year, he thanked the Babelsberg Film School for his education. And this was not meant ironically – but rather dialectically.

Director Andreas Kleinert and screenwriter Thomas Wendrich didn‘t include the famous scandal at the award ceremony in Munich in their journey through the tumultuous, beautiful, dangerous, and deeply sad life of Thomas Brasch. Other than that, they included a whole series of biographical turning points. The barracking as a cadet at age 12, the rebel against the march of the “socialist brother nations“ in Prague in 1968, the delivery of “the organs“ from his own father. Then the arrest, parole during the production, latent surveillance and “processing“ by the Ministry for State Security, and lastly the deportation to the West on December 1976. And later on, the cultural rise in the West: the jet set, the big apple, more and more drugs, falls. These authentic stations feel like the dramaturgical cornerstones of a drama, novel, or a conventional biopic. But Kleinert and Wendrich resist the temptation to use them as a comfortable framework. Instead, they playfully work with the facts, widely shake things up, leave things out, bulk things up, exaggerate and underplay. This is all done with the kind of passion and mood that is rarely seen in German cinema. Their film is chronologically structured, but does away with all the cliches of causal meaning. They meet the excessiveness of their anti-hero eye-to-eye.