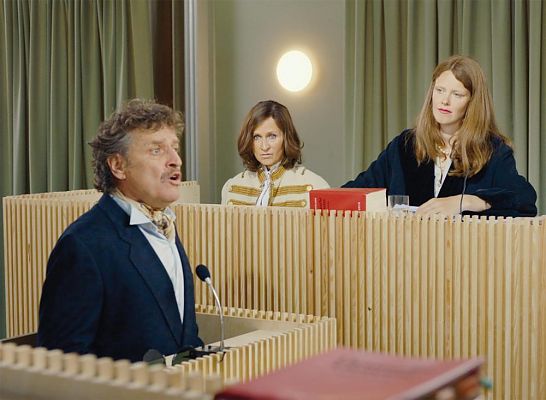 “I am the state!,“ is how “Sun King“ Louis XIV summarized the political program of absolutism. Max Linz takes up this motive for the theatrical performance of politics in L‘ETAT ET MOI and follows it through the history of German ...

With the sentence “L’etat, c‘est moi!“ - “I am the state!,“ “Sun King“ Louis XIV once summarized the political program of absolutism. Power cannot be separated from its embodiment and performance. Max Linz takes on the motive of the theatrical performance of politics in his third film L’ETAT ET MOI and and follows it through the history of German jurisdiction.

In his comedy, composer Hans List (Sophie Rois) travels from the year 1871 to present-day Berlin. With him he has the penal code clause of the German Empire describing the offence of high treason. The architecture around the Berlin Palace, especially the Humboldt Forum, is the setting of the entire film.

While Hans List becomes the target of executive power, junior lawyer Yushi Lewis (Jeremy Mockridge) and judge Josephine Praetorius-Camusot (also Sophie Rois) dream of the passion seen in US trials, and the revolutionary Les Miserables is staged in the State Opera. The theatricality of politics does not lead to the politicization of theatre, however, the subversive art that appears in L‘ETAT ET MOI is done so by mistake, if at all. Perhaps this diagnosis also smacks of nostalgia for a time when writers and composers took to the streets like in the Paris Commune, or when agitation was still a legitimate artistic strategy like in the era of Eisenstein who is quoted in the film?

The form of the farce that Linz chose is also nostalgic and includes mix-ups, slapstick, and disappointed love. The absurdity is only strengthened by the alienating effects, stares into the camera, and markedly wooden dialogue, making L‘ETAT ET MOI seem like a response to Julian Radlmaier‘s Marxist vampire film BLUTSAUGER.