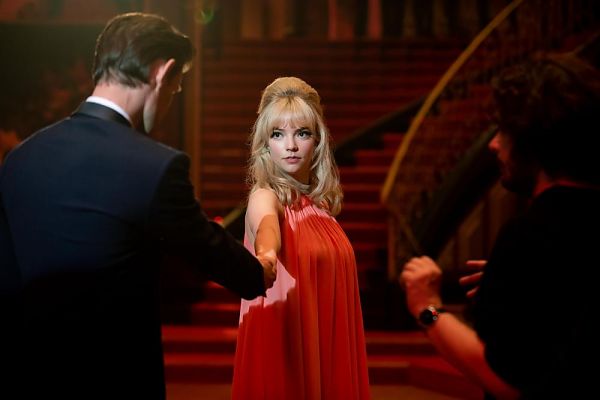 Sensitive and introverted Eloise dreams of glamorous Sandy at night, who wants to become a singer in the swinging sixties in London. But soon the dark and dangerous sides of the sixties are revealed.

Edgar Wright‘s film LAST NIGHT IN SOHO is a wonderful homage to the women of the 60s in British film, fashion, and pop music. Thomasin McKenzie (LEAVE NO TRACE) and Anya Taylor-Joy (The Queen‘s Gambit) play the main roles as student Eloise and her imaginary sixties dream girl Sandy. The older generation is embodied by two sixties icons: Rita Tushingham (A TASTE OF HONEY, THE LEATHER BOYS), who was the face of the emergent British independent cinema,and the recently deceased Diana Rigg (The Avengers) who was the only woman to have married James Bond besides Emma Peel.
Sensitive and introverted Eloise is raised by her grandmother and loves hearing her records, which are the first things she packs in her suitcase when she moves to London to go to fashion school. She comforts herself with 60s pop at parties with her snotty roommate, before moving in with old Alexandra and dreaming of the life of glamorous Sandy who wants to become a star in the swinging sixties. Eloise slowly transforms into Sandy, becoming a retro hip mod girl and receiving more recognition at her school. But she soon realizes that her dreams are more than fantasies. The darker side of the 60s starts to show and Eloise is dragged into a thriller surrounding abuse and murder. Edgar Wright garnishes his film with hits by Sandy Shaw, Petula Clark and Cilla Black and invokes the visual style of the sixties with double exposures, cross-fades and psychedelic color effects. His main focus, however, is the notion of diving into a different era to acquire creative energy: retro style as an escape from the algorithm pop of the present.