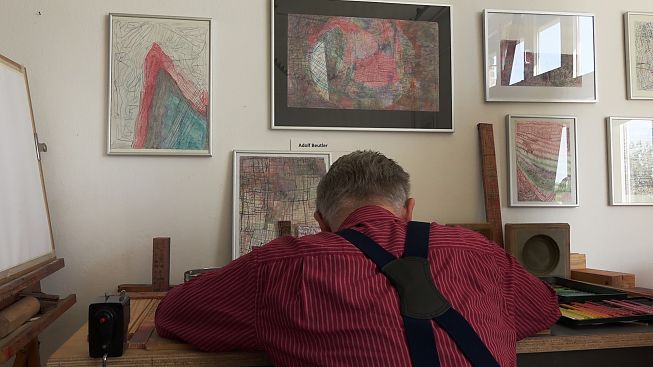 Art Comes from the Beak the Way It Has Grown

A documentary about the art studio “Mosaik“ in Berlin Spandau where people with disabilities work.

Adolf Beutler, now 83, sits over a canvas with a complex system arranged by patterns. He reaches for another color, draws, arranges, includes a wooden block in the process, arranges it. Sometimes he can‘t continue and has to cry. Beutler is one of the artists in the art workshop “Mosaik“ in Berlin Spandau. People with disabilities work here every day.
Filmmaker Sabine Herpich gives her protagonists the time they need to show their art on camera. Adolf Beutler doesn‘t talk a lot, but his thought streams and feelings can be found in his work after a long process of working through it. As a child he evaded Nazi euthanasia after that he had to survive 40 years in the psychiatry until he was able to move to a living community in the late 80s. He discovered the art workshop and one could “see“ him at work for the first time here. He found recognition and appreciation. The so-called outsider artist is a part of the art market by now because the head of the workshop, Nina Pfannenstiel, also works as an agent and does great work. She gives him a framework, offers comfort, asks the right questions, and steps back when she senses that he needs to be alone. Moreoever, shes pragmatic. It‘s also about making money, after all, because like in all areas of the institute you need to refinance. Along with her sensitive observations, Herpich also asks fundamental questions about art and the art market. How important is the self-portrayal of the artists? Is the curating gaze what gives the work its value?