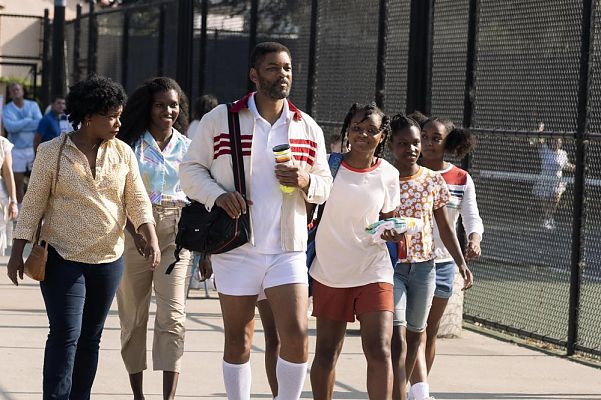 Richard Williams (Will Smith) doesn‘t leave anything to chance. The dedicated father has planned out every step of the tennis careers of his two daughters Venus (Saniyya Sidney) and Serena (Demi Singleton). He sees it as the only chance for his children to get out of poverty and achieve something in white society. He had to prove himself his entire life and wants a better life for his children. For that to happen, they spend day and night in a improvised space surrounded by gang-war ridden Compton. While the neighbors think Richard is crazy and have called child services, his wife Brandy (Aunjanue Ellis) stands by her man. The effort and tenacity pays off at some point: Venus and Serena are invited to a game and win their first tournament. But Richard doesn‘t want to relinquish control of his children‘s fate and has his own ideas which scandalizes the right, white upper-class tennis world.

Reinaldo Marcus Green (“Joe Bell“) has sympathy for “King Richard“ and his unshakeable belief in the American Dream. Richard is convinced that each and every person can make it if they work hard enough.The message may be simple, but Green transports it sincerely and with a lot of humor. This appealed to Will Smith, who isn‘t just the film‘s producer and brought the Williams family on board. He also gave Green the best performance of his career, which gives him a good shot at winning his first Oscar after receiving two nominations.