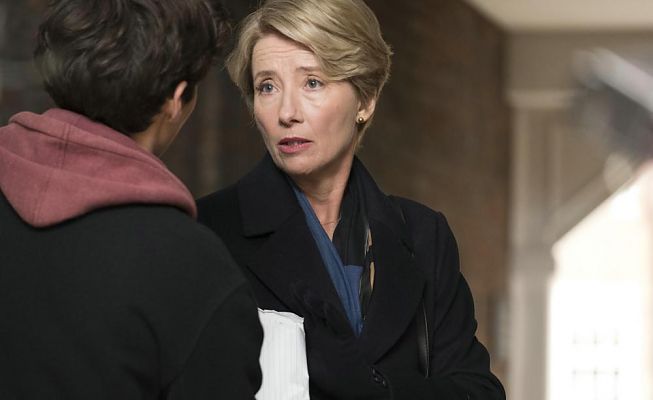 Emma Thompson plays a family court judge whose private life is in shambles and loses her professional distance because of it. An adaptation of the novel “The Children Act“ by Ian McEwan.

Family court judge Fiona Maye sits at her desk, still in the classical costume, but her shoes are off. She is slim, you can see the inner resilience on her face, her pulsating, constantly working spirit. This time it‘s about the separation of conjoined twins, which means one of the children will die, but a separation is the only thing that could save at least one of the girls. Director Richard Eyre perfectly tailored the role to Rmma Thompson, she carreies the Ian McEwan adaptation with her enormous presence and nuanced acting. The author wrote the screenplay himself. Maye lives in a London that only consists of the high court and her apartment in Gray‘s Inn, where the bar association is located. She plays the piano in order to relax. It‘s an affluent, venerable, male-dominated environment.

Fiona decides to separate the twins and is at her desk again when her husband Jack, a history professor, tells her he is going to have an affair. Fiona doesn‘t have time for her own drama, the next case is pressing: it‘s about a boy who will only survive with a blood transfusion but he and his parents are Jehova‘s Witnesses and refuse to agree to the operation for religious reasons. Against all the rules Fiona decides to visit Adam the minor in the hospital. Fighting for this boy, which has suddenly become the essence of her being, is embodied with such dedication that one can overlook the otherwise quite conventional narrative. We want to watch her as she explores her hidden world – every gesture, every look works.