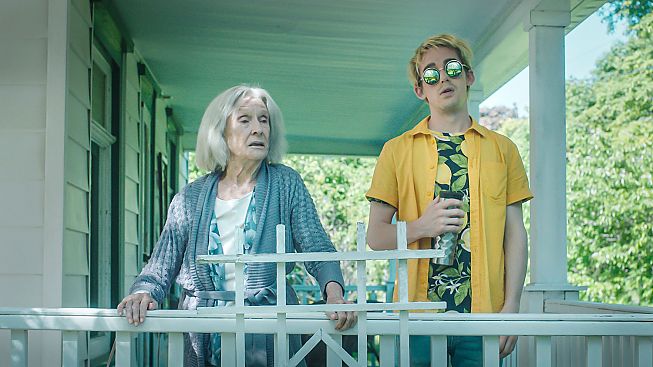 After an embarrassing performance, Russel flees to his grandmother‘s who lives in a small town and finds success with his drag performances there. However, the real star is grandmother Margret, one of Cloris Leachman‘s last roles.

Nothing is going right for Russel. His acting career is non-existent, he messes up his drag debut as Fishy Falters because he falls off the stage drunk. He flees and leaves the club, his suit-wearing partner and financial provider, the dog and Toronto and drives to tranquil Prince Edward County to his grandmother Margret. She has to stop him from committing suicide on his first night and decides her grandson has to take care of her. Russel blossoms in the province. He works as a drag queen in the semi-queer smalltown bar, flirts with barkeeper Zach and cooks for his grandmother, who is facing her own mortality and the losses in her life. While Darling Russel comes back to life with wigs, high heels and lip synching, Margret says goodbye.

Director Phil Connel puts the emancipatory power of drag performance at the center of his feature-length debut. While the plot features nice images it doesn‘t reveal much that‘s new, grandmother Margret is the real heart of the film. Cloris Leachman, who was over 90 during filming and has since passed away, plays the droll grandmother, who is troubled by the deterioration of her body and spirit while still wanting to mantain the dignity of a self-determined life. The bony body, liver spots and slow movements are displayed by Leachman without any vanity. Leachman was successful in both dramas and comedies in her long career. In 1972 she received an Academy Award for playing a lonely wife in Peter Bogdanovich‘s THE LAST PICTURE SHOW and many Emmys for her appearances in the comedy show “Malcolm in the Middle“ and she remains a star in JUMP, DARLING.