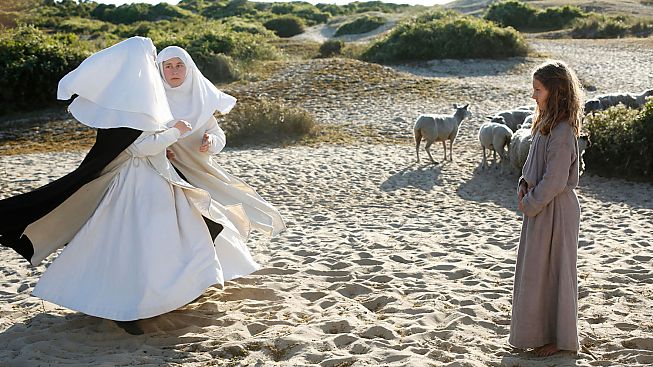 Bruno Dumont‘s extremely odd rock opera about Jeanne d‘Arc‘s childhood is a about the ecstatic decision to revolt.

It would seem that lately, France has been giving the world a lot of portraits of a lady on fire. In the same year as Céline Sciamma’s much-talked about lesbian costume drama, fellow countryman Bruno Dumont has turned his gaze on France’s most iconic flaming femme — Joan of Arc.

JEANNETTE: THE CHILDHOOD OF JOAN OF ARC (2017) and its sequel JEANNE (2019), have both arrived in German theaters to tell the story of the medieval heroine of the Hundred Years War. In depicting Joan’s life in a diptych, Dumont follows in the footsteps of Jacques Rivette’s two-part “JOAN THE MAID” (1994), which chronicled key moments in the life of the Joan of Arc.

But that is where the similarities end. Dumont, an avant-garde director, has
revealed his creative voices through an approach that privileges idiosyncrasy over history. This is especially true in his first film installment, which is a bundle of WTF.

JEANNETTE portrays a few drawn out moments in Joan’s young life, when she was a simple shepherdess. Using equally simple production values, the film takes place mostly in one sandy beach location, with characters entering the frame like a play. The problem (or some might argue, the charm) is that the movie feels like bad children’s theater. There’s awkward acting, a flowery script, and camera work that can only be described as a cinematographer suffering from Dunning-Kruger effect.

Then there’s the head banging.

JEANNETTE is a heavy metal musical. Yes, somewhere between Jesus Christ Superstar and Jacques Demy, Dumont has constructed a village where guitar shredding meets flying hair and interpretive movement. Much is sung about Joan, the suffering soul. Audience members might feel a similar burden.

But to quote John Waters, there is “good bad taste,” and there is “bad bad taste.” Which category JEANNETTE falls into is anyone’s subjective guess. For Waters — the Pope of Trash — the film had enough spirit for him to canonize it into his top ten films of 2018, seating it at number one. But this is John Waters, so his recognition isn’t necessarily an endorsement.

Ultimately, Dumont’s wink-wink sensibility gets old and redundant, turning high concept into little more than a one-note indulgence. For all its head banging, the film offers no mental stimulation. By movie’s end, you want Joan to cut her hair already and just get on with the battle.

JEANNE, Dumont’s sequel, picks up on the same sandy dunes, with actress Lise Leplat Prudhomme reprising her role. With her short hair, she is now transformed — and so is the director’s craft. Acting performances are subdued, the camera language, more sophisticated. If Dumont set out to make a bad-looking movie on purpose in the prequel, here he demonstrates his technical competence. If only the film had more to offer.

Whereas JEANNETTE is sing-songy, JEANNE is talky talky. It has none of the aspirations toward campiness or originality of its predecessor. Missing this eccentricity, the film becomes a trial — for both Joan and the person watching.

In this second installment, the story returns to the same bare beaches, and later a cathedral where clerics question Joan for her alleged blasphemy. The court case fills up most of the film’s 134 minutes, discussing measured, academic minutiae as a defiant Joan answers her accusers. But unlike earlier interpretations of the trial in literature, theater, and film, this exchange has no dramatic tension. Nor is there the kind of character psychology so beautifully portrayed by Carl Theodor Dreyer in his 1928 silent classic.

As a filmmaker who considers his work closer to a visual arts practice, Dumont is entitled to reject narrative conventions. But at the least, he should provoke some big questions about faith, power, or religiosity. Instead the film becomes a bland procedural, revealing nothing about the human condition as we labor toward the inevitable pyre.

It’s unusual that Dumont, a director known for his savage depictions of violence, would at movie’s end choose to frame Joan’s burning at the stake not in close-up, but with a cool and distant wide shot. The climactic final scene fizzles, offering none of the extreme body horror one might expect.

Viewed as a total work, JEANNETTE and JEANNE is a spark of an idea that turned into an uncontrolled blaze. For most viewers, it will take a courage of conviction to go willingly into this bonfire of artistic vanity.