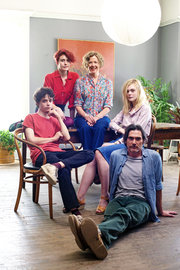 Mike Mills 20TH CENTURY WOMEN is a warm-hearted trip to late 70s sunny California. Single mom Dorothea (Annette Bening) wants to help her teenage son Jamie get through puberty with the help of her patchwork circle of friends.

Mike Mills 20TH CENTURY WOMEN is a warm-hearted trip to late 70s sunny California. The film has a whiff of wistfulness , perhaps because Mills made the film as a homage to the beloved, unconventional women in his life, or maybe because the 70s was a time when people really attempted to create individual life plans. The luminous center of the film is Annette Bening, who plays single mom Dorothea Fields with a lot of charm and verve. Growing up in the 30s, Dorothea had her son late, when she was over 40, and she cares for him in a liberal way. In flashbacks we see the creative excuse letters that she writes for her son Jamie for school. She lives with Jamie, played by Lucas Jade Zumann as a very lovable and someone introverted teenager, and her tenant Abbie, a depressed punk photographer played by Greta Gerwig, in a shabby gem of a house. Other quasi roommates are carpenter William (Billy Crudup), a sexy hippie who helps with the renovating, and neighbor girl Julie (Elle Fanning), Jamie’s best friend – a status that’s hard for Jamie to swallow.

In the beginning of the film Dorothea decides that Jamie needs other attachment figures along with her so he can successfully go through puberty and asks Abbie for help. She takes the boy to concerts and gives him feminist books. 20TH CENTURY WOMEN shows the collective attempt to master Jamie’s puberty in a time of political upheaval in a funny, nostalgic, and lovable way. Mills has a good a grasp on the various generations as well as on the slightly overwhelmed 20th century boy in the middle.