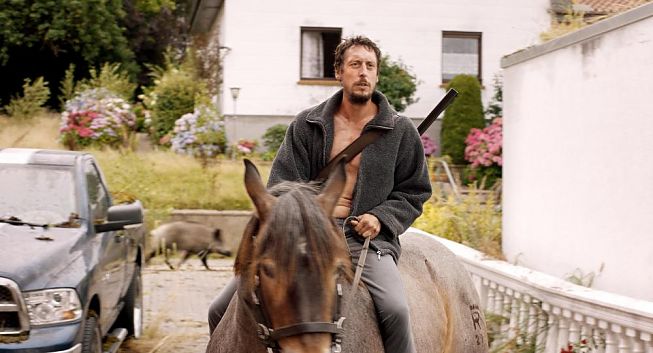 One morning everyone else has disappeared and Armin is the last man far and wide.

Armin (Hans Löw) is a texbook loser. He lives in a tiny one room apartment in Berlin in his early 40s, has problems with his boss, and no luck with women. His body has seen better days and now he has to go home because his beloved grandmother is dying. He seems to have given up and spends the night getting drunk alone in a parked car while other people celebrating on a party boat pass him by. Just 12 hours later he sails that same boat on the lake. No people in sight, like the rest of the world. In his hangover daze he comes to realize that all people have disappeared, and Armin of all people is now the last man far and wide. What would you do if you were suddenly all alone in the world? How can life go on after the initial shock? 7 years after SCHLAFKRANKHEIT, Ulrich Köhler has made film in the popular sci-fi subgenre but does defy expectations every now and then. Together with Silke Fischer and Jochen Dehn (production design) and his regular cinematographer Patrick Orth he has created some grandiose images and strong scenes, permeating quiet dread but also lush beauty that is very memorable. Hans Löw, who recently made a good impression in ALLES IST GUT, is alone during long stretches of the film and has clearly reached his physical limits in the role. Armin loses his pot belly quickly in any case. The changes that this new world will bring, somewhere between a dystopia and a utopia, isn‘t just a thrilling experience for Armin.