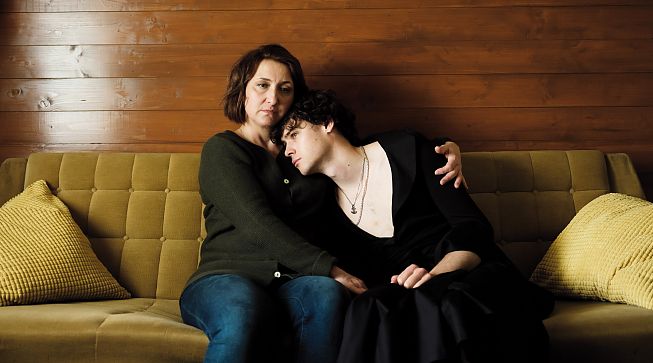 Mario attracts attention. He dances, loves disco music, and paints his nails. The South Tyrol village community tolerates him. Bue he‘s not well-liked. It‘s a different story for handsome Lenz, Mario‘s best friend and the son of a winemaker, is studying acting in Vienna and is about to move to Rome. Lenz has what Mario wants. There‘s a bit of envy there, but also intimacy which goes beyond friendship. When Lenz returns to the village, Mario decides to go to Rome with him. Both of them become queer club victims of an islamist attack. Lenz dies. Mario survives and can‘t stand it. He returns to the village alone and everything gets out of control until he meets Nadim. A former classmate and Muslim.

South Tyrol director Evi Roman includes a potpourri of themes. Sexual identity, religious terror, survivor‘s guilt, racism, addiction. It could easily be too much, but it isn‘t. She expands the thematic field of tension with sensitivity. She shows Mario‘s precious situation almost incidentally. He makes money by temping and pays alimony for a child he has no relationship with following a threesome with Lenz and village beauty Claudia. Life is always in crisis for Mario. Romen introduces allies to him. His father, Nadim, Lenz, and dancing. Along with the original music by Florian Horwarth, the main theme song is one by French-Lebanese pop star Ricky Shayne, who was popular in Italy and Germany in the 60s as a melancholy rock ‘n’ roller. In 2019 Stephan Geene gave the almost forgotten singer a cinematic tribute. The fact that Mario is a Shayne fan is a nice gimmick. The perspective of the novel shows: it‘s a fan of Mario. That and the casting make HOCHWALD vivid and enchanting. It received the “Großen Diagonale Prize“ and protagonist Thomas Prenn one the Austrian Film Prize.