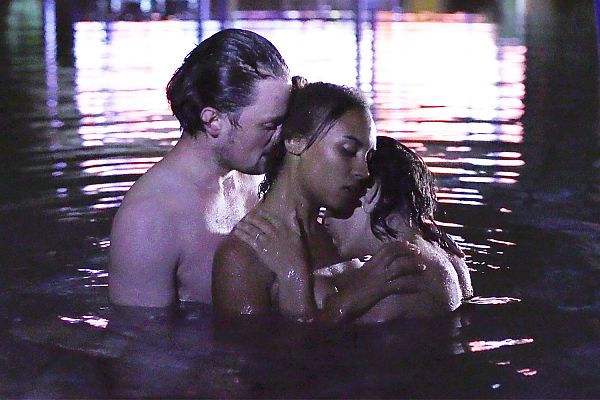 Before We Grow Old

During one summer in Berlin, Maria, Niels, and Chloë become a loving throuple. Then Chloë gets pregnant and their lifestyles and utopias are called into question.

It‘s summer in Berlin. Niels and Maria are living for the moment. You don‘t find out a lot about them, he works in a cafe and sometimes brings her coffee, she roams the streets with her sprayer friends at night, they probably both study. Right now though it‘s summer and they live temporary and mundanely in the uncle‘s loft by the Landwehrkanal. A lot of freedom also means sexual openness. The first scene has Maria approach a friendly American hipster artist at a bar. Niels later joins and suggests a threesome. When the come on starts getting too much for the man, Niels blames Maria: “you went overboard again,“ but Niels was just as aggressive. A lot of freedom, at least with Niels and Maria, is connected to a certain brusqueness and self-centeredness that suggest that they, in their late-to-mid 20s, have been doing their own thing without concern for repercussions for a long time. They‘ve been together for two years but the relationship feels “casual,“ it can end at any moment. There‘s a lot of negotiation about sex, but little is spoken about. Behind the horizon of the film plot the question of what what comes next arises. Maybe Chloë? The British PhD student is only in the city till the end of August and isn‘t opposed to a Ménage-à-trois. The trio roams around the Bermuda triangle of Friedrichshain-Kreuzberg-Neukölln, break into a swimming pool at night, look at the sunset from the rooftops of Berlin apartment buildings and at the paddlers from the meadow of Urban Hospital...that latter doesn‘t seem to play a role, until it does.