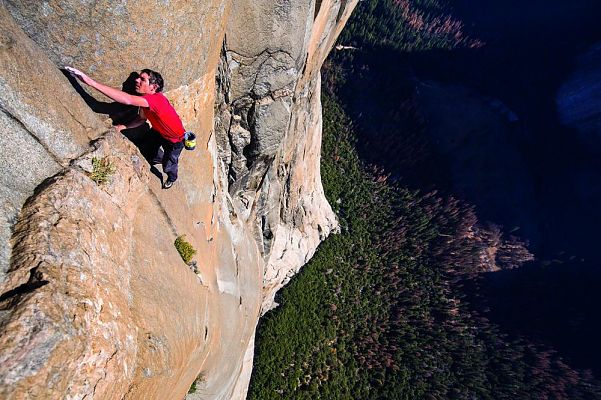 El Capitan is a relentless granite formation in Yosemite National Park that in some parts is 1000 metres high, a mecca for rock climbers. There have been two documentaries dedicated to the behemoth in quick succession. THE DAWN WALL (released last September) follows free climbers Tommy Caldwell and Kevin Jorgeson as they climb the invincible “Dawn Wall.“ In FREE SOLO Alex Honnold chooses a tested route, but he climbs it free solo – all in one go without protection or rope. On June 3rd 2017 he was the first person to climb El Capitan with no aids. Even though you know beforehand that Honnold survives the climb, the last 15 minutes of the film are one of the most breath-taking cinematic experiences you will probably have this year. When it comes to tension, FREE SOLO one-ups the already immensely tense DAWN WALL. The dizzying and grandiose camera work contributes to this, but it‘s mostly the perverse thrill of every misstep meaning certain death. Not even the camera person, a very experienced climber, dares to look at the most difficult parts. When Alex does finally arrive on top, it is mainly relief rather than triumph that can be felt in the team. That‘s entirely different from DAWN WALL, where the climb is a collegial team effort and both climbers tested out a particulary tricky sections millimeter by millimeter for days beforehand until they finally found a way across what seemed like a very slippery smooth surface. They are all obsessed, but Alex in FREE SOLO is closer to madness than most – and is thoroughly aware of that, like when he says things like “being happy never helped the world. Those who want to change things, have to strive for perfection.“