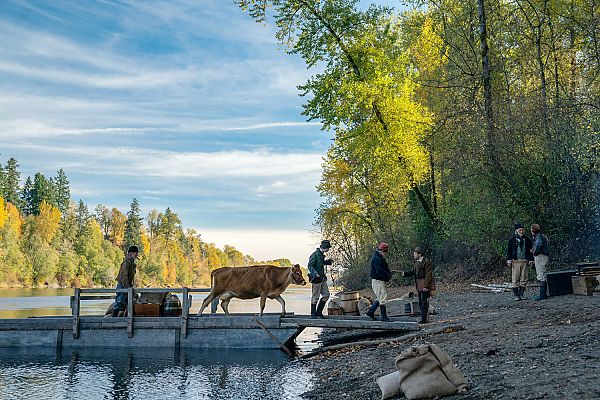 FIRST COW is a tender story about the friendship between two men who are different than the Hollywood image of the “pioneers“ of the West.

Kelly Reichardt‘s films seem as though they‘re from a different time, a time when counter-culture saw itself as such and circles with mutual interests were organizing themselves. For her unconventional western FIRST COW, New York-based director Reichardt worked together with writer Jonathan Raymond from Oregon once again. Raymond wrote the screenplay for OLD JOY, WENDY AND LUCY, MEEK‘S CUTOFF, MILDRED PIERCE, and NIGHT MOVES. FIRST COW modifies the motifs of Raymon‘s novel HALF LIFE, a long story about friendship and betrayal between a shy cook and a devious cowboy who want to find their luck in the fur business in China, and later on how the cook and a Chinese migrant try to eke out a living again in 1850s California. In FIRST COW, the Chinese migrant King Lu (Orion Lee) is the trickster and the go-getter who meets chef Cookie (John Magaro) and starts a flourishing business making butter cookies. In order to make them, they have to sneakily milk the only cow in the territory which belongs to the corrupt mayor. FIRST COW is a tender story about the friendship between two men who are different than the Hollywood image of the “pioneers“ of the West. Asian migrants appear as Chinese cooks in westerns, if at all, and western film cooks stir the beans with bacon and don‘t get much appreciation at all. Here, the unwashed men in the frontier town are enthusiastic about the cookie creations that were made with love. FIRST COW is an anti-western that‘s also about how racism and the power of money has taken the same route out West as the have-nots who came to the territory to find their luck.