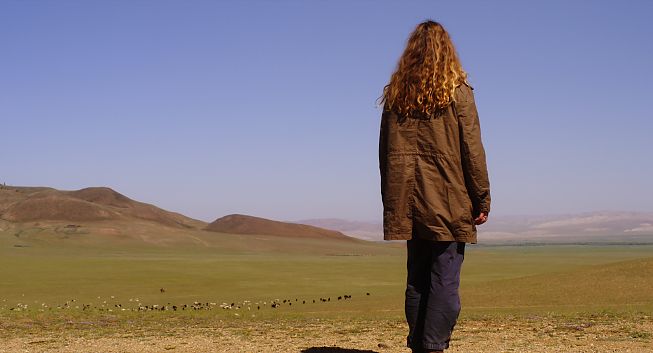 Sound engineer Corine takes a job in Mongolia to escape her grief after losing her husband. While there she discovers she has the ability to go into a ritual trance.

After the death of her partner, Corine Sombrun (Cécile de France) stumbles in her everyday life while in deep mourning. In order to gain some distance, the sound engineer travels to Mongolia to record a Dhukan shaman during her rituals in a small village. When Corine hears the big drum of the shaman for the first time, she falls into a frightening trance. The shaman tells her that she, Corine, is a chosen one and has to train to be a shaman to control her gift and be able to return from the empire of spirits. At first Corine believes it to be nonsense and returns to Paris, but whenever she hears the drum recording, she begins going into another trance…
Corine‘s story is based on real events. Fabienne Berthaus tells it with a lot of naturalism and with such minimal methods that it feels like you‘re in an ethnographic film, especially in the part that is set in Mongolia. Berthaus also treats the question of whether there indeed is a world beyond in a pleasantly reserved way. It shows the deep conviction of the Dukhans and the scepticism of Corine‘s Parisian circle that is just as deeply entrenched.