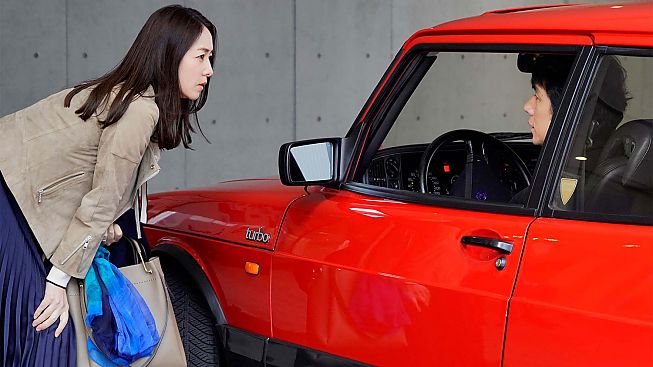 The reserved, very controlled people that this adaptation of a Haruki Murakami short story depicts are very slow to open up. The moments in which pure emotion breaks through are that much more staggering because of it.

Following Lee Chang-Dong‘s BURNING (2018), Ryûsuke Hamaguchi has made the second stunning adaptation of a Haruki Murakami novel with DRIVE MY CAR. Murakami‘s stories about sad people are often about how helpful it can be to take the time to just sit somewhere, like the narrator of the novel ‘The Wind-Up Bird Chronicle,“ who is at wit‘s end and decides to sit in public for months until something happens. In DRIVE MY CAR, director and actor Yûsuke is driven around in a car when nothing else can help. This has the advantage of creating empty time where he can think and he ends up arriving somewhere, a waste incineration plant, the sea, a village where a terrible accident happened – and something changes.

The first 45 minutes of the film is the prequel to the story, after which the opening credits roll. Yûsuke (Hidetoshi Nishijima) and his wife Oto (Reika Kirishima) just had sex. She tells a story about a young girl who invades her classmate‘s house, taking an object from his room and leaving her own object there each time. Both of them continue to imagine the story at different situations: they‘re an artistic couple, he is a theater director, she a TV writer. Their relationship seems happy and productive, and after Yûsuke accidentally sees his wife have sex with young actor Kôji (Masaki Okada), nothing seems to change about their life together. They grieve the death anniversary of their daughter together, they continue to tell each other stories and sleep together. Until a terrible accident occurs.

The film‘s actual plot begins two years later. Yûsuke, who has specialized in experimental shows with subtitles and actors speaking different languages, has been invited to Hiroshima where he is meant to direct Chekhov‘s ‘Uncle Vanya‘ with a new ensemble. For insurance reasons, he gets a driver, the quiet, young Misaki (Tôko Miura). The film interweaves the production of the play and the existential crises of the characters in Uncle Vanja with those that Yûsuke, Kôji, Oto and Misaki experience. As if to free himself and secretly take revenge on Kôji, Yûsuke gives him the role of Vanya, who has lost everything and has to continue to live with his grief and disappointment.

As in Yûsuke‘s (and also Ryûsuke Hamaguchi‘s) theater methods, it is also about the small moments in which ‘something happens‘ between people and actors, like Yûsuke says after a scene between a Chinese actor and one using Korean sign language. The reserved, very controlled people in the film need time to open up. The moments where pure emotion breaks through are all the more overwhelming because of this. The gradual closeness between Yûsuke and driver Misaki, whose story is told at the end of the film, is especially intense. A quiet, smart film that won the Best Screenplay prize, the Critic‘s Prize and the Ecumenical Jury award at Cannes.