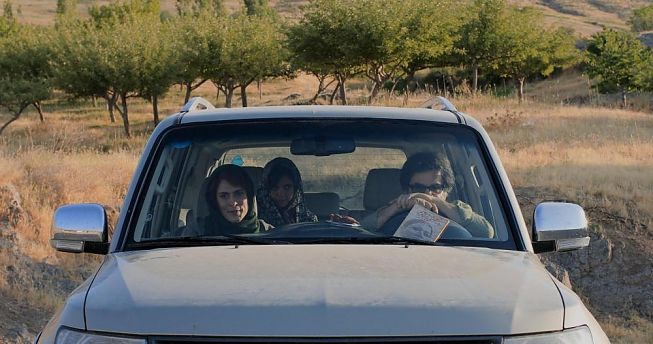 Director Jafar Panahi receives a cell video showing a young woman threatening suicide. Together with actress Behnaz Jafari, he makes his way to the province to find her.

A young woman can be seen on a cell video talking about dreaming of being an actress, passing the exam at university, and her family refusing her wish out of fear of losing respect in their village. She has no way out anymore and is sending her last message from a cave to director Jafari Panahi who is meant to relay the message to famous actress Behnaz Jafari before she kills herself.

It‘s a gloomy beginning to a pretty uplifting film in which Panahi, the director of TAXI TEHRAN, is sitting behind the wheel yet again. This time it‘s in order to drive to a province in northwestern Iran with an agitated Behnaz Jafari where they want to find out what‘s behind the story and whether it was authentic video footage.

The encounters with the villagers of his native region give Panahi the opportunity to observe ideas like freedom and progress from different perspectives. The narrow winding roads of the mountains have established a sophisticated honking system that regulates the right of way for example. It‘s only when viewers find out that a resident would‘ve broadened the street a long time ago if she was allowed to that the common practice is put into question. The road trip leads to many such big and small metaphors for the situation in Iran without overloading the story with symbolism. Panahi‘s personal situation as an artist with an employment ban is a topic again too. The narrative strands don‘t gather around him this time but rather around Shahrzad, an ousted film diva who is being ostracized and isolated in a village and becomes the fix point for the protagonists.