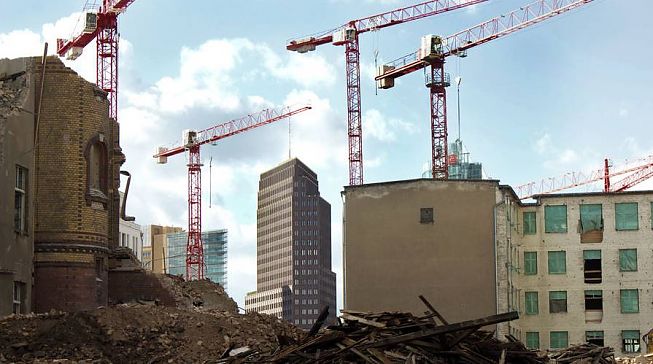 Sometimes documentaries are like horror films. It’s all the worse when the grimness isn’t an imaginary nightmare but something in our daily reality, like the Berlin real estate market and its development. STADT ALS BEUTE was a 2001 theater play by René Pollesch which became an anthology film four years later that artfully dealt with Berlin selling out. Andreas Wilcke has shot a documentary that lets property owners, investors, CEOs, thrown out tenants, and last but not least Michael Müller, former senator for urban planning and the current mayor of Berlin, have their say. The current image of a once relaxed housing market, revealed in firm presentations, house visits, scouting trips, and individual interviews, shows shocking evidence of what has determined the lack of affordable living space. “Natural fluctuation” is mentioned when people with lower income are thrown out and forced to live in the periphery. The idea that people getting Hartz IV really don’t have to live in Potsdamer Platz is derisively commented on and sentences like “modernization is currently the best investment” is enough to turn your blood cold – especially when the film shows smug men in suits presenting the mathematical models of rent increases. Engel & Voelkers, Zeigert Immobilien, the Union of Free Housing Companies, vacated citizens, and the tenants of a unregistered renovated house in Wisbyer Straße show both sides of the development in a matter of fact way. This immediacy and lack of sophisticated imagery is where the film’s strength lies.