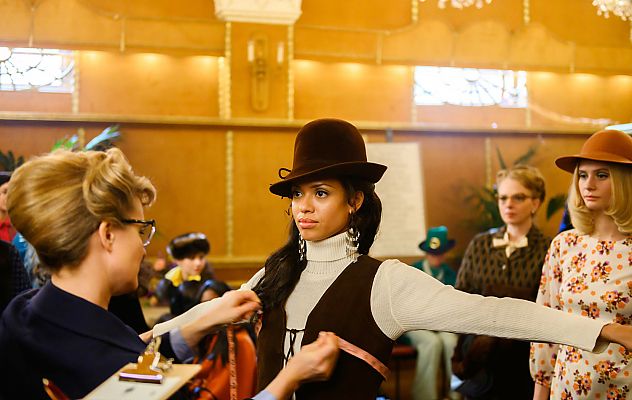 The Miss World beauty contest in 1970 is hosted by comedian Bob Hope and transmitted from London to the entire world. The newly founded “Women‘s Liberation Movement“ decides to protest against the sexism of the event.

MISBEHAVIOR tells the real story of the 1970 Miss World competition in a pretty British way – with a sense of humor, a brisk narrative technique, and a knack for everyday details. The center of the story is young mother and history student Sally Alexander (Keira Knightley). Despite the child and a second chance education, she finally got into university only to discover that she is being ignored by the professors and that her issues are marginalized while her own mother is playing make up with her grandchild at home. And so she resdiscovers herself in the newly founded “Women’s Liberation Movement” and becomes the driving force along with anarchist Jo Robinson (Jesse Buckley) in their mission to protest against sexism in the Miss World competition that is meant to take place in London. The competition, which is hosted by comedian Bob Hope, is a gigantic TV event with millions of viewers around the world. While a small, radical women’s group work on their subversive plan, the competition organizers have to deal with another political opponent first: the anti-apartheid movement demands a boycott of South Africa and condemns the “solution” of the organizers of having two candidates from South Africa to compete – the white “Miss South Africa” and the Black “Miss South Africa.” The film keeps switching perspectives and also shows what happens behind the scenes of the competition with its surreal mix of dirty jokes and obsession with propriety. Miss South Africa Pearl Jansen (Loreece Harrison) and Miss Granada Jennifer Hosten (Gugu Mbatha-Raw) are in the foreground, as their participation is an important step in equality. MISBEHAVIOR doesn’t turn the women on both sides against each other, but rather creates an entertaining panorama of a complex, exciting time.