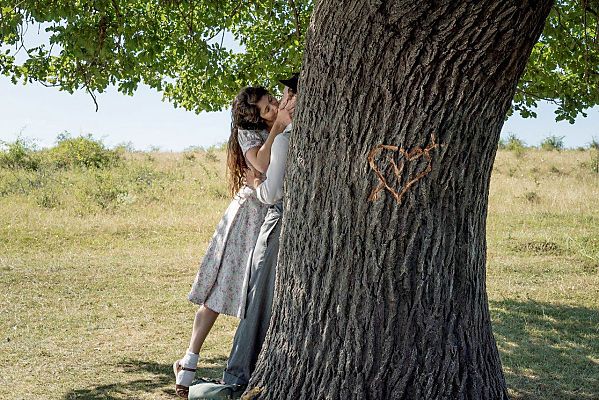 The History of Love

Young Leo wrote his beloved Alma a book before the war broke out. Years later, Leo is a lonely, cranky old man in New York. A young New York girl who doesn’t believe in love comes across Leo’s manuscript by accident.

Leo Gursky (Derek Jacobi) is a cranky, lovable old man. He likes to act like an helpless old fogey in front of strangers to get a seat in the New York subway or to annoy a waitress who spills his coffee by mistake. Leo’s quirks are amusing, but his loner status has a tragic background. He (Mark Rendall plays the younger version) and Alma (Gemma Arterton) swore that they would love each other for eternity in the rural idyll of a Polish shtetl. When the war broke out the two separated and Alma fled to the US. When Leo was finally able to follow her and track her down in New York, she was already married. Their love only existed in a book that young Leo wrote for Alma ever since, but the manuscript was lost in the fog of war.

The manuscript falls into the hands of a New York teen (Sophie Nélisse) who, as fate would have it, is also called Alma and is deeply moved by the book. It becomes clear that her and Leo’s paths will cross early on, but the film, based on Nicole Krauss’s novel, takes its time and depicts both of the characters’ lives. Leo, who found his great love when he was young, could never realize it and was robbed of its only witness, the book manuscript. Alma believes romantic love is fictional and tells the object of her affection that she would rather be friends though she keeps looking at his relationship status on facebook. Their encounter could be a turning point for Leo as well as Alma.