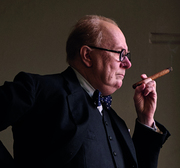 The Germans captured Belgium in May 1940, France is on the brink of surrendering, and the Nazi invasion in England is foreseeable. England‘s prime minister Winston Churchill is faced with a decision of either continuing an almost hopeless war or ...

Joe Wright has revived the costume drama in recent years with PRIDE & PREJUDICE, ATONEMENT, and ANNA KARENINA. His productions are inventive and opulent – the Chiaroscuro lighting in THE DARKEST HOUR is reminscent of the paintings of court photographer Cecil Beacon. But the story, the drama at the heart of the film, is more important to Wright than hoop skirts or the right tabacco case. Every detail is perfect, you can be sure of that, but the decor never deflects from the people and their concerns.

The drama at the heart of THE DARKEST HOUR is political. In May 1940 Germany has occupied Belgium and France is just about to surrender. The British troops are encircled in Dunkirk and Calais and the US is adhering to their neutrality. A Nazi invasion in England is foreseeable, and so England is faced with the decision of either going to futile battle alone against the German army or starting peace talks with Mussolini to possibly secure their own independence, which also means accepting the downfall of Europe. Prime minister Winston Churchill (an Oscar-worthy performance by Gary Oldman) is vehemently against negotiating, but doesn‘t have the full support of the parliament and ends up feeling doubt himself.

THE DARKEST HOUR begins as a sly portrait of a difficult and feared character. The grouchy mumbler, who had scotch, champagne, and an egg with bacon for breakfast, was rarely sober and never without a cigar. He is not seen in the first, brilliantly composed scenes, but is still very present. The atmosphere is boiling in the House of Commons during the deselection of Churchill‘s predecessor. A war cabinet should be built under a new leader and the left want Churchill as a prime minister, but he doesn‘t have a lot of support in his own party. Churchill himself shines due to his absense, there‘s only a hat on his chair. In the Palace ,King Bertie complains that he has to work with the loser of Gallipoli. Meanwhile, a new, nervous secretary is getting prepared in Churchill‘s home. Don‘t ask questions, make sure to double space. Then finally: the bedroom door opens. It is pitch dark and a fat man lights his first cigar in his bathrobe.

The comedic elements dwindle in the course of the film, though Churchill‘s puns are always present. While the military keep delivering more worrying reports and the war supporters and appeasement supporters fight to dominance, THE DARKEST HOUR transforms into a political thriller. Winston Churchill, according to Wright, was the right man at the right time and place, despite all of his mistakes, his early misjudgements. His adherence to the war course and his historic speeches influenced the outcome of World War II in a decisive way. Wright also shows how this decision preceded personal doubts and just how catastrophic it could have been had the US not entered the war, for example.


Along with DUNKIRK (Christopher Nolan) and THEIR FINEST HOUR (Lone Scherfig), THE DARKEST HOUR is the third recent British film that focuses on the early war years and the evacuation of the British troops in Dunkirk. DUNKIRK follows the fate of simple soldiers waiting to be saved on the beaches of Dunkirk in the style of a relentless survival thriller, THE DARKEST HOUR highlights the puppet master in the background, and the comedy THEIR FINEST HOUR is about civilians and the beginning of feminism as a side effect of the war effort. All three conjure up a time in which England merged for a common, idealistic goal. It also serves as a reaction to today‘s deeply divided society that allowed Brexit to happen.