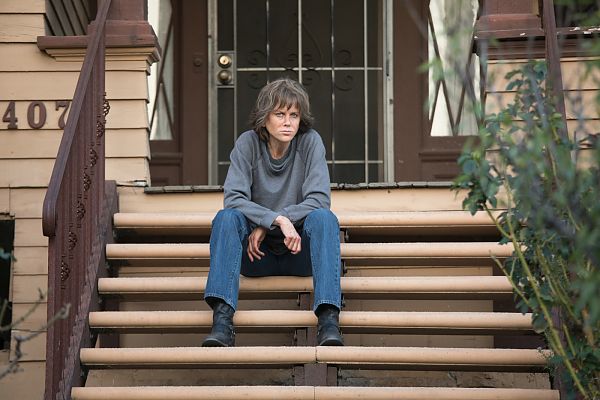 Nicole Kidman‘s restrained but intense performance as down-and-out policewoman Erin Bell is the highlight of DESTROYER, which tells a typical noir revenge story.

Detective Erin Bell stumbles to a crime scene that already has two colleagues on the case. “Rough night?“ With swellings everywhere and dark circles under her eyes, Nicole Kidman as Bell looks like she bathed in booze and slept in her clothes for days. Kidman‘s walk is reminiscent of the junkie version of a western hero. She rams her long, thin legs straight into the ground and balances her upright but swaying body behind. Kidman is a classic noir hero here, playing a character who is already done with life in a way reserved for men till now. Nicole Kidman‘s restrained but intense performance is the highlight of DESTROYER, which tells a typical noir revenge story.

Years ago something goes awry during an undercover mission which changed detective Bell‘s life forever. She can‘t have relationships, her marriage has fallen apart, and her daughter wants nothing more to do with her. When Bell discovers a tattoo on a murder victim which suggests that the gang leader whom she investigated back then is active again, she makes a last attempt at getting her affairs in order and tying up loose ends. She does what she can to get her daughter out of the gang environment and prepares for a confrontation with her old nemesis, the sadistic arch miscreant Silas (Toby Kebbell). DESTROYER is a solidly constructed, very dark and atmospheric noir film under a beaming sun. However, no plot can compete with the emotional devastation of Nicole Kidman‘s character. The story of how detective Bell became a walking booze bottle could even have been more devastating.