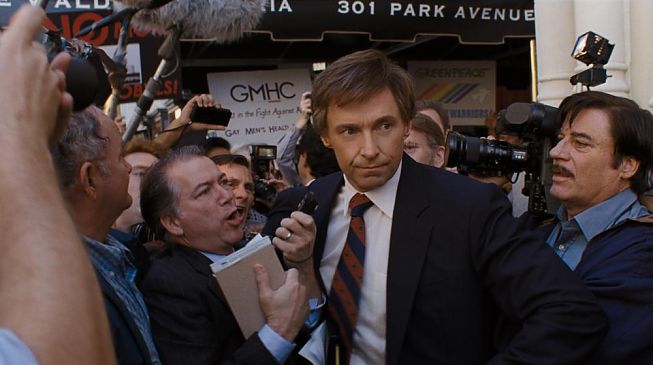 An adaptation of Matt Bais novel All Truth Is Out with a fantastic cast about the rise and fall of two-time US presidential candidate Gary Hart who stumbled due to his extramarital affair in the late 80s.

THE FRONT RUNNER is an all-star adaptation of the book by Matt Bai, All the Truth Is Out, which recounts the rise and fall of two-time, two-timing, U.S. presidential candidate Gary Hart.

The film is a vivid trip to 1980s America complete with gratuitous smoking, snippets of 80s anthems, and real footage of those television personalities integral to the American experience, such as the late comedian Johnny Carson, and reporters Ted Koppel and Tom Brokaw.

Gary Hart, played by Hugh Jackman, is reticent when the cameras are off. Nonetheless his strong ideals as a presidential hopeful are apparent. He is resolute and maintains the conviction that enquiries about his personal life are nothing more than unjustified distractions. Meanwhile he’s continuously measured against his co-runners in the race by his campaign manager, played by J.K. Small, on his looks and charm. Tension builds from Hart’s efforts on the campaign trail to come across as human enough to be relatable, but not so human that the public sees his flaws.

Weeks before the election for the Democratic nomination, journalists catch on to Hart’s extramarital affair with Donna Rice, who has her own aspirations but is dismissively labeled as “the other woman.” Despite unequivocal evidence of his affair, Hart strives to keep public attention directed away from his personal life and focused on his campaign platform. He ultimately suffers because these events predate the merge of paparazzi culture and politics.

Phone cameras and social media provide a constant stream of sensational news, however scandal today seems to forge rather than ruin a political career. So I walked out feeling as though I had been smacked in the face with the irony of it all; that news of this affair defined and ended Hart’s candidacy, but nowadays would have been rapidly consumed and forgotten or replaced, media fodder.