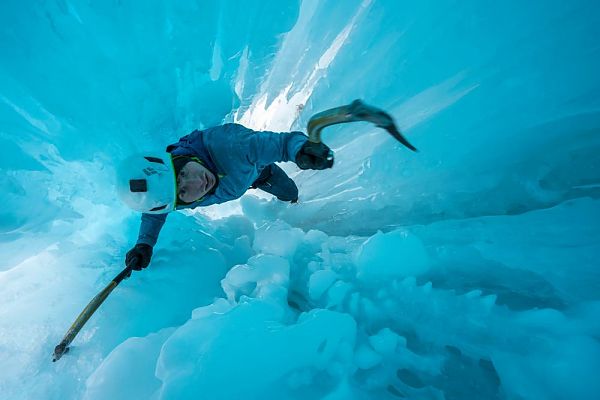 In 2017 rock climber and sport film director Peter Mortimer filmed climbing legends Tommy Caldwell and Kevin Jorgeson during the first free climb of the steep face “The Dawn Wall“ in El Capitan at Yosemite National Park. The film combined a personal portrait with spectacular mountain shots and an interest in “how“ to climb which made it fascinated for non-climbers. In his new documentary, Mortimer follows young Canadian climber Marc-André Leclerc, or tries to at least. Leclerc prefers to climb alone, “solo,“ meaning without protection and “on sight,“ meaning without a test run. After the first few film shoots he disappears without a trace, and it‘s only a few months later that the team finds out over social media that Leclerc climbed the Emperor Face on Mount Robson, a monster made of stone, snow and ice in the Canadian Rockies. When asked about it he asserts “It wouldn‘t be solo if somebody was there.“ The team finds a compromise: Leclerc climbs Mount Robson again for the film, and for the next project, climbing Torre Egger in Patagonia in winter (!), Leclerc takes a friend and a camera with him. Spectacular images and breath-taking panoramic views are captured, but there are also scenes in which the camera calmly observes how Leclerc, relaxed and focused, checks for the smallest cracks and edges, hooks himself onto fragile looking icicles, and digs through snow overhangs. Leclerc‘s joy in the private, unsecured encounter with the living mountain is palpable, but the discomfort of his friends and the film team regarding the extreme challenges that he takes on is also a topic. Marc-André Leclerc died in 2018 at just 25 years old in an avalanche.